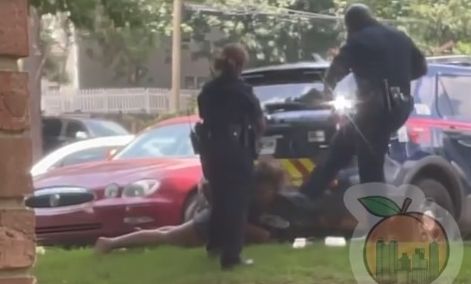 A police officer in Atlanta has been suspended and another one placed on administrative leave after a video clip surfaced of a police sergeant kicking a Black woman in the head after she spat at his feet.

A video clip of the incident was placed on social media and went viral. According to the Instagram post that captured the incident:

“APD were called to a Summerhill apartment for a domestic incident between a woman and another resident. The woman who was detained on the concrete face down was kicked in the face by an officer after she spat on his boots and pants. Do you think excessive force was used in this situation?”

According to Atlanta In Town, an Atlanta Police officer was seen in an Instagram post kicking a woman in the face as she laid on the ground with her wrists in handcuffs. Based on that video, the attacking police officer was suspended while the other was placed on administrative leave because she failed to intervene.

The Atlanta Police Department released a statement late on Monday that both police officers who are seen in the video had been relieved from duty.

“Upon reviewing the video, the actions of the sergeant appear to be unacceptable and we are also concerned with the apparent lack of reaction from another officer present during the incident. The decision was made to relieve both employees from duty, with the sergeant placed on unpaid suspension and the officer placed on administrative assignment. The Atlanta Police Department’s Office of Professional Standards (OPS) was directed to open an investigation into the actions of all employees on-scene and their investigation is to be expedited.”

Gerald Griggs, vice president of the Atlanta NAACP (The National Association for the Advancement of Colored People) talked with Fox 5 Atlanta.

“Shocked and angered,” said Griggs, “You know we’ve been talking about community-police relations for a long time in Atlanta. And to see something like that, a handcuffed individual kicked in the face, nothing justifies that. So, you know, the NAACP got involved, started investigating, reached out to the police chief, made contact with the family, and ultimately we’re trying to get to the bottom of what happened.”