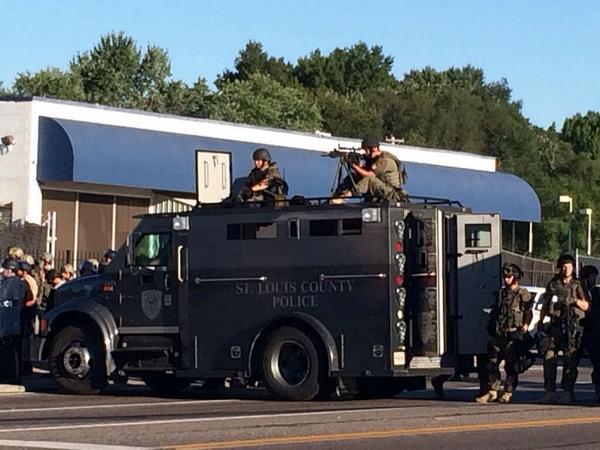 The tension continues to increase in the riot-torn Ferguson, Missouri, where angry residents, the hacktivist group Anonymous, and headline-seeking journalists have all converged.

On Aug. 13, two reporters from the Washington Post and the Huffington Post were detained for less than an hour by police after tweeting about the local authorities attempting to remove patrons from a McDonald’s. Wesley Lowery (Washington Post), who is a former Los Angeles Times reporter, and Ryan J. Reilly confirmed that they were assaulted by police before being arrested.

Lowery said he was slammed into a soda machine, while Reilly later said he was accosted by police.

Lowery, an African American, appeared later that evening after being released, and called into “The Rachel Maddow Show,” where he detailed how he was forcibly placed in custody by the police. “I got no explanation at any point while in custody other than ‘trespassing’ —at a McDonald’s where we were customers,” Lowery said. According to the journalist, he was gathering his items to leave when his bag slipped off his shoulder. After telling the officers that he was adjusting his bag, an officer said, “Let’s take him,” and he was placed in temporary restraints.

There is a mandatory, no exceptions curfew in Ferguson, which gives the authorities the power to arrest on sight if violated. But this occurrence happened in broad daylight, before the curfew was enacted. Lowery’s testimony is particularly shocking given the fact that there was “no arrest report, no mug shot and, of course, no names of the officers provided.”

The Ferguson Police Department did not respond to any immediate request for a comment on Lowery and Reilly’s detention.

We will update you as any further news develops on the situation.