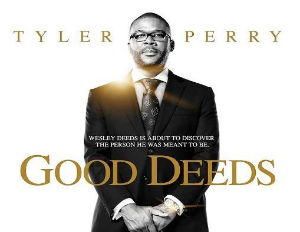 Tyler Perry is known for donning many different hats in the movie-making process, but one woman is now claiming that she, not Perry, deserves credit for the Good Deeds movie plot.

Good Deeds, released in 2012, is a Madea-less tale of an unhappy, uptight, but successful man whose life is changed by a free-spirited, young single mother who cleans his office. Starring Tyler Perry, Thandie Newton, Gabrielle Union and Phylicia Rashad, Good Deeds brought in over $35 million at the box office.

Author Terri Donald, aka “TLO RED’ness,” claims that the plot of Good Deeds was snatched from her book titled Bad Apples Can Be Good Fruit – a book Donald claims she sent to Perry years before production of the film began. She is asking for $225,000 and acknowledgment in the opening and closing credits.

Head to TheGrio for more details on the lawsuit.