Tyler Perry To Stop Making Movies To Focus On OWN Projects 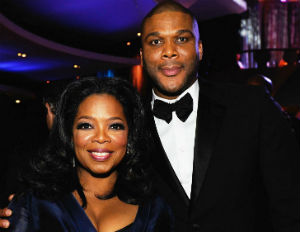 Tyler Perry’s latest movie The Single Moms Club marks the Hollywood writer/director/producer powerhouse’s 17th film in 10 years. It also marks his final film under his partnership with Lionsgate. And it marks the end of an era as a filmmaker. One of Hollywood’s most bankable talents plans to take a break from making movies for now. He’s now devoted to making his television series for Oprah Winfrey’s Network.

Perry said he wanted to mark his anniversary in filmmaking by saluting one of the most overlooked people in our country–single moms. The movie is about the strength of the single mom, whom Perry calls his heroes.

The Single Moms Club, starring Nia Long and Amy Smart, is about five struggling single moms who form a support group. The film opened March 14th with $8.3 million at No. 5. It reportedly fell short about $10 million of studio expectations. It was Perry’s second lowest opening ever as a director, debuting weaker than 2007’s Daddy’s Little Girls, which opened at $11.2 million, according to Box Office Mojo.

On average, opening weekends bring in $21 million for Perry’s movies, and net a domestic gross of $50 million. The Single Mom’s Club could still pull in around $30 million to $40 million in total, which is in keeping with box office receipts for a non-Madea-related Perry film. As of March 23rd, the film had grossed $12.9 million.

Perry’s highest grossing film to date at $90.5 million is Madea Goes To Jail followed by Madea’s Witness Protection at nearly $67 million worldwide. All told, his last 16 movies, which were made on average with budgets under $15 million, have a lifetime total gross of about $845 million worldwide.

Perry made his foray into films transposing many of his straight-to-DVD stage productions into screen gems. It was the $50.7 million box office success of his 2005 debut Diary of a Mad Black Woman that landed him a lucrative first-look, multiyear distribution deal with Lionsgate Entertainment.

In February, the two parties decided they would not renew that deal–but they also didn’t rule out future collaborations, reports TheWrap.com. Both flourished during their partnership, with Perry building an Atlanta-based film and TV production empire and Lionsgate growing into a major Hollywood studio. The Twilight and Hunger Games franchises obviously played a major factor in that growth, but Perry helped the studio–which launched in 1997–find its early footing with films that African American audiences, in particular, loved, according to TheWrap.

Now, Perry is taking a break from moviemaking to focus on producing projects for mentorâˆ’friend Oprah Winfrey. He has a multiyear partnership to produce, write, and direct scripted content for OWN. He reportedly is the only producer to have scripted series’ on the network in addition to an equity stake in the company. Perry’s series’, The Haves and the Have Nots, For Better or Worse, and Love Thy Neighbor, are scoring strong ratings on OWN. In fact, The Have and the Have Nots has generated the network’s highest ratings.

Despite its weak showing at the box office, OWN is still moving forward with a series based on The Single Moms Club movie. The hour-long drama about a group of single mothers who bond together in facing their individual struggles will air this fall, making it the fourth Perry show for the network.

On March 20th, Perry wrote to his fans in an e-mail letter that “this is the first time in 10 years that I don’t already have my next movie written or shot and ready to come out. That is because my focus for this past year has been on my TV shows on OWN. Just so you know, that’s where you’ll find me until I do another movie.â€