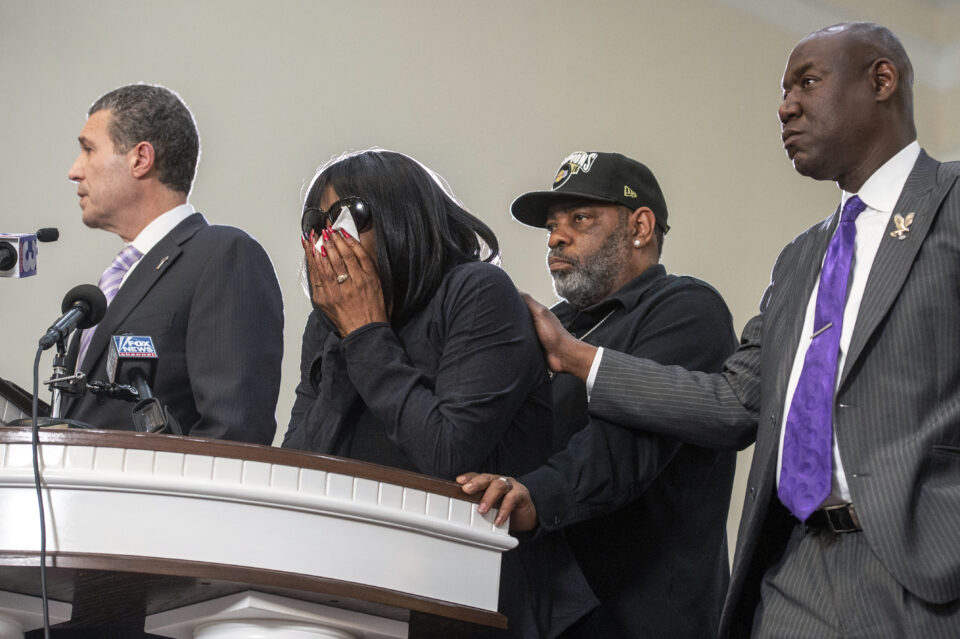 MEMPHIS, TN - JANUARY 23: RowVaugn Wells, second from left, becomes emotional during a press conference at Mt. Olive Cathedral CME Church after she viewed footage of the violent police interaction that led to the death of her son Tyre Nichols Memphis, TN on January 23, 2023. She is flanked by attorney Antonio Romanucci, from left, husband Rodney Wells, and attorney Ben Crump. (Photo by Brandon Dill for The Washington Post via Getty Images)

After a confrontation with police officers that led to his death, the family of Tyre Nichols discovered that as he was being beaten, he cried out for his mother in a similar fashion to George Floyd.

According to People, members of Nichols’ family recently viewed video footage from a police body camera that was filmed at the time of the arrest. The family witnessed the police officers beating, restraining and tasing Nichols.

The family appeared at a press conference in Memphis at Mt. Olive Cathedral CME Church to discuss the tragic incident that led to Tyre’s death several days later.

After seeing the footage, the driver’s stepfather stated, “Our son ran because he was scared for his life.”

“…I don’t care what color — black, white, pink, purple, should [never] go through this,” Nichols’ mother, Ravaughn Wells, also said at the press conference. “My son didn’t do no drug[s], didn’t carry no guns, he didn’t like confrontation, none of that, that’s why this is so hard.”

Benjamin Crump, the family’s attorney, stated that after seeing the video of the arrest, he compared it to the Rodney King video from 1991, when Los Angeles Police were seen mercilessly beating him.  The footage “reminded us of the [1991 LAPD] Rodney King video,” as he called the video “deplorable” and “heinous, violent … troublesome on every level.”

The attorney also mentioned that Nichols cried out for his mother a couple of times during the taped three-minute beating.

The video has yet to be released or viewed publicly.

In a statement given last week, Mayor Jim Strickland and Police Chief CJ Davis said, “We understand and agree that transparency around the events surrounding the death of Mr. Tyre Nichols is critically important, especially the release of the video footage.”

They did state that the video of the incident will be released “after the completion of the internal investigation into the actions of the officers and after the family of Mr. Nichols has had the opportunity to review the video privately.”