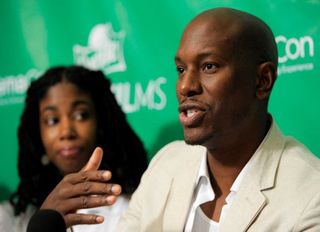 Tyrese Gibson got his start crooning jingles on a bus in a Coca-Cola commercial.Â  Now with nearly 20 years of showbiz experience behind him as an actor and a singer, the superstar who often goes by simply Tyrese, has gone back to his soda pop roots as a celebrity mentor to six young filmmakers as part of the Sprite Films program.Â  Since 1998, the program has given student filmmakers from colleges and universities across the country the opportunity to showcase their talents on a national stage. On September 5, a panel of renowned film industry professionals will select the winning film, which will be shown in select theatres this November.

Tyrese took a break from shooting his latest film to talk with BlackEnterprise.com about mentoring the next generation of moviemakers, his own filmmaking ambitions–and his mission to bring true R&B back to the masses.

As a mentor in the Sprite Films competition, what type of wisdom did you impart to the participants?

I was there to offer clarity and help them work through certain things. I think a lot of times people don’t think beyond the moment. It can be very discouraging if you don’t win. You can go home and start to doubt yourself. I had to remind them that some of the biggest stars who started on Star Search, American Idol and some of these other shows end up being way bigger whether they made the final cut or not. I would offer small tidbits to remind everyone how blessed and fortunate they were to be finalists.

Do you have any filmmaking ambitions?

I do. I actually just told a friend of mine that if they’re going to do anything for me for Christmas or my birthday– to put me through film school. I want to do a four-month course of some type–just get away and start having some fun playing with the cameras. Of course I’ve done plenty of movies and I’ve seen the gist of what happens and how it all works, but I want to see everything through a director’s point of view.

As a director, what genres are you most interested in directing?

I think the dramas are a little easy for me right now, and then eventually you want to lighten it up and get into some funny stuff.Â  I want to do something that may be a little dark and then go to the next level after that.

You have a great relationship with director John Singleton. Is he someone you look up to as a mentor and director?

Oh, absolutely. John Singleton changed my life forever. I was just talking to him on the phone last night.

How do you juggle both your film and music career?

Scheduling is everything. I think a lot of people get overwhelmed with doing so many things at one time. I’ve always been a multitasker, and ultimately I just love what I do. So, I don’t look at it as work.