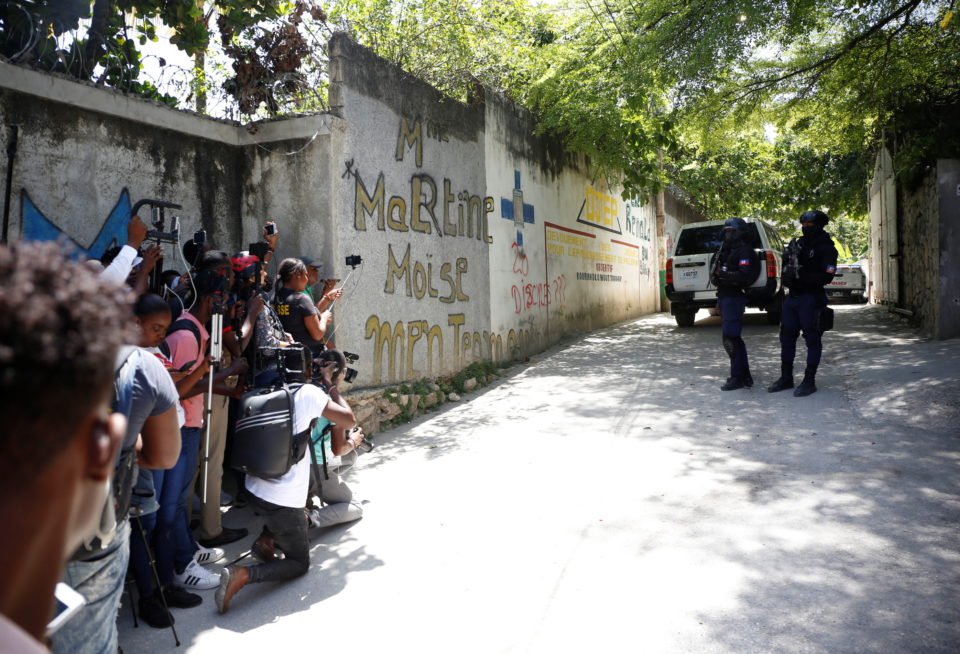 FILE PHOTO: Journalists gather next to police officers standing guard near the private residence of Haiti's President Jovenel Moise after he was shot dead by gunmen with assault rifles, in Port-au-Prince, Haiti July 7, 2021. REUTERS/Estailove St-Val

Reuters – U.S. law enforcement and intelligence agencies on Friday were probing American connections to this week’s assassination of Haiti President Jovenel Moise, three sources said, the day after two Haitian-American men were arrested on charges of participating in it.

Haitian police identified the two as James Solages, 35, and Joseph Vincent, 55, saying that they were part of a heavily armed commando unit, who sources in the Colombian army said entered Haiti from the neighboring Dominican Republic.

Two law enforcement sources, speaking on condition of anonymity to discuss an active investigation, said that agencies were looking into U.S. connections to the killing, but declined to comment specifically on the two suspects.

The sources said U.S. agencies were not assisting in the investigation in Haiti because Haitian officials had not requested their help.

A third source confirmed that U.S. intelligence agencies were also looking into the matter.

Haitian authorities have said little to explain why Solages and Vincent, two Haitian-Americans from Florida, would have been motivated to join Colombian mercenaries to assassinate Haiti’s president.

Solages described himself online as a “certified diplomatic agent” and the former “chief commander of body-guards” for the Canadian embassy in Haiti. Those statements were made on the website of a charity he ran, which was modified on Thursday to remove them. Reuters reviewed an archived version that remains accessible.

The Miami Herald quoted an unnamed government official as saying that a decade ago, when Solages was in his mid-20s, he briefly worked for a company that provided security for the Canadian embassy in Haiti.

“We are aware of allegations implicating an individual who was briefly employed as a reserve bodyguard by a security company hired by Global Affairs Canada in 2010,” the newspaper quoted the official as saying.

Public records show Solages, a naturalized U.S. citizen, lived in Tamarac, Florida, near Fort Lauderdale, and does not have a criminal record.

Solages also ran a business called FWA SA A JACMEL AVAN INC, which has described itself on its website as a charity focused on ending childhood hunger and improving education in Haiti.

Few details had emerged about Vincent by Friday.

(Reporting by Brad Brooks in Tamarac, Florida, and Mark Hosenball in Washington, writing by Jan Wolfe; Editing by Scott Malone and Howard Goller)