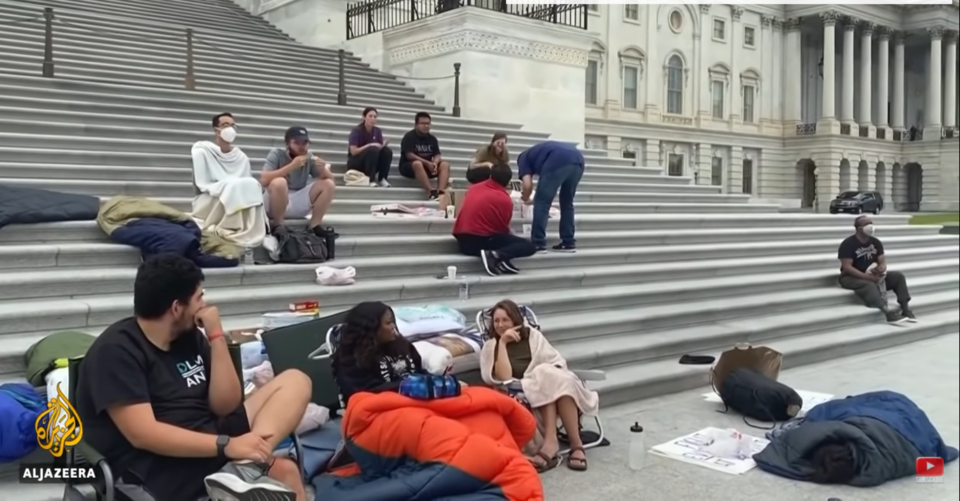 Missouri Representative Cori Bush (D), in the orange sleeping bag, sleeps on the steps of Congress to protest the ending of the eviction moratorium. Image: Youtube/AlJezeeraEnglish

Reuters – A U.S. judge on Monday questioned lawyers for the Biden administration and landlords challenging a new eviction moratorium put in place last week by the Centers for Disease Control and Prevention (CDC).

“What about the trajectory of the pandemic given the rising numbers?” Friedrich asked Brett Schumate, a lawyer for the landlord groups.

Schumate argued there are also a rising number of vaccinated Americans and said the CDC was “fully aware” of the Delta variant when it issued the planned final extension in June.

The new moratorium, which expires Oct. 3, protects millions of renters from eviction and covers counties with substantial or high COVID-19 transmission rates. The ban currently applies to 89% of U.S. counties.

“We’re in a new chapter of this pandemic… and the new or extended moratorium is a reflection of the updated public health situation,” said Brian Netter, a lawyer for the Justice Department.

The landlord groups charge that the CDC issued the new order “for nakedly political reasons.”

Netter said it was “unambiguously incorrect” that the government is acting in bad faith in defending the moratorium.

More than 15 million people in 6.5 million U.S. households are currently behind on rental payments, according to a study, and collectively owe more than $20 billion to landlords.

The groups won a ruling from Friedrich in May declaring the CDC’s eviction ban unlawful, but the District of Columbia appeals court blocked an effort to enforce the decision.

In June, the Supreme Court voted 5-4 to let the CDC moratorium remain in effect after the agency announced it would allow the ban to expire on July 31.

The White House initially said that CDC did not have legal authority to extend the ban. After being asked again by President Joe Biden to reconsider and under pressure from congressional Democrats, the CDC reversed course.

Citing the fact the new CDC order is almost identical to the expired version and numerous administration statements, Friedrich asked whether she should be bound by the appeals court decision. She told Netter it is “really hard… not to conclude there is a degree of gamesmanship going on.”

Netter noted the White House said Friday that Biden would not have supported a new CDC moratorium if he did not feel confident in the legal backing.