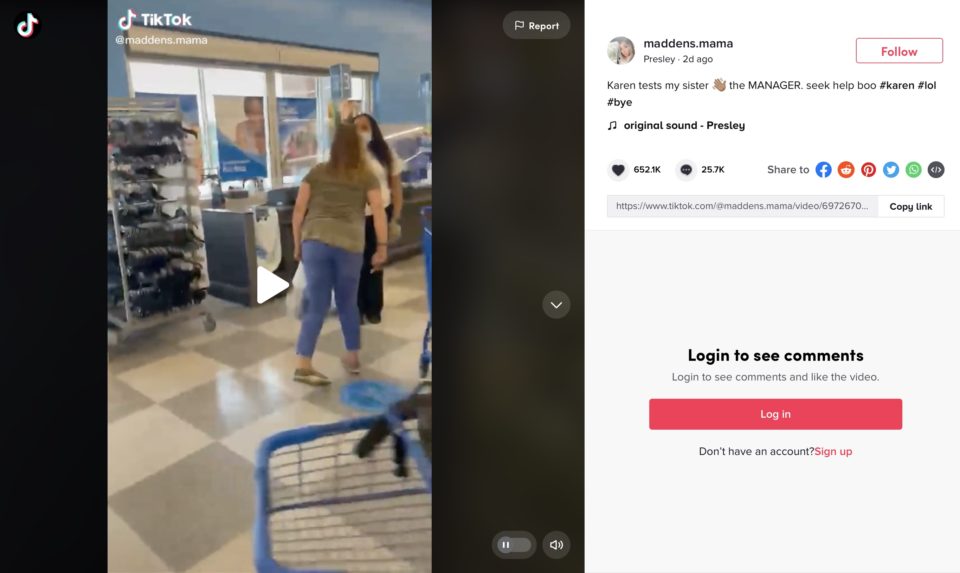 A Black woman gave a masterclass on how to remain cool, calm and collected under fire.

A viral video on Sunday shows a Black female manager at Ross calmly dealing with being cursed out by an angry and seemingly racist and irate white woman customer.

Although “Karen” was not heard using a racial slur, she did go off on a tirade hurling slurs at the manager, who is Black, as if the nasty words would shame her. But the Black manager had time and clearly wasn’t shook by “Karen’s” vile language.

It is not clear when or where the incident took place, or what caused the incident, or how it escalated to the level of the white woman yelling and making a scene in the clothing store.
Celebrities like Loni Love of The Real, even appealed to Ross to give the Black woman a raise for her grace under pressure.

Hey @Ross_Stores please find the unbothered Queen and give her a raise… also Sis with the Goddess braids was ready…. #Karenstrikesagain pic.twitter.com/uvS27lY0aE

According to one of the original reports, the incident happened in St. Louis and there is an active GoFundMe for the manager who is going through tough times during the pandemic.

Social media sympathized with the calm manager who patiently handled the disrespectful and racist attitude of “Karen.”

“You are prejudice, and you are an ugly motherf–kin’ [b-word], is what you are,” the angry white woman said.

After she was told by the unbothered manager to “please leave,” the white customer could not help herself when she threatened the Black manager while collecting her belonging. “Oh I’m leaving. You’re going to be leaving soon too, I promise you that, you f–kin’ nobody [b-word].”

“Call it racism!” “Karen” said, acknowledging that her actions were horrible. “F–k you, you f–kin’ Black [b-word],” “Karen” yelled on her way out.

The very last thing the woman said was an inaudible remark about the Black manager being a “monkey” and sitting on her porch.

The video was reposted on several platforms, but on TikTok, user @maddens.mama, who claims her name is Presley Altieri, the sister of the manager, received more than 1.5 million views and 250,000 likes from the 32-second clip.

“My sister is the manager at a Ross location in St. Louis, MO. She does NOT get paid enough to be treated like this. The way she handled this situation is admirable!” Altieri said on GoFundMe, requesting $1,000 from people.