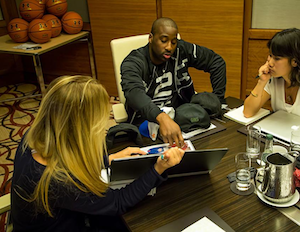 If there’s one team NBA prognosticators can’t seen to agree on, it’s the New York Knicks. The team enters the 2013-14 season with a new general manager, a coach whose option was just picked up last month, and a star player in Carmelo Anthony who has openly said he will explore his options in free agency. All that … and not to mention the albatross of a contract that belongs to Amar’e Stoudamire.

One constant in a narrative nearly devoid of them has been the play of guard Raymond Felton. The North Carolina product, a fifth overall selection in 2005, was one of the Knicks’ most steady presences last year, averaging 14 points and over five assists per game. He was probably the team’s best player in the first-round defeat of the Celtics.

Felton, 29, endorses Under Armour. During the team’s recent trip to Baltimore, lauded as a homecoming for native Carmelo Anthony, Felton got the chance to visit the Under Armour headquarters. Under Armour’s social media team documented the visit. Like brandmate Stephen Curry, Felton will wear the Anatomix Spawn, but in a custom colorway.