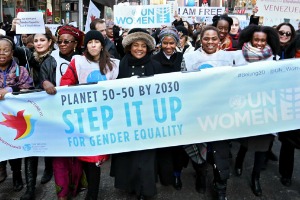 This year’s theme is ‘Planet 50-50 by 2030: Step It Up for Gender Equality.’ In a statement released by the United Nations, the theme will equally focus on new commitments under UN Women’s Step It Up initiative, and other existing commitments on gender equality, women’s empowerment and women’s human rights.

[Related: Join Black Women “Getting in Formationâ€ to Advance Nutrition and Agriculture for International Women’s Day]

The U.N. is organizing International Women’s Day events in more than 40 countries around the world. Events include: a friendly hockey match between a men’s and women’s team in Tanzania on 5 March; a march and cycling rally in New Delhi, India, on 6 March; a festival with live musical and dance performances in Palestine on 8 March; marches, a football match and painting expositions across Albania from 5-8 March; and a women’s ‘run to Step It Up’ in SÃ£o Paulo, Brazil, on 20 March–to name just a few.

Additionally, the United Nations has compiled 3 ways you can get involved: