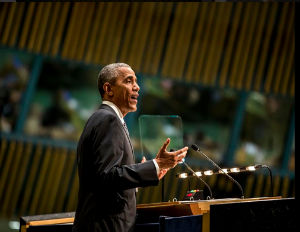 This week more than 150 of the world’s leaders are networking and discussing major issues that impact nations at the United Nations General Assembly (UNGA) in New York, according to reports.

Today, Presidents Barack Obama talked about issues including diplomacy, sustainability, and humanitarian efforts. His remarks were livestreamed this morning.

“The people of our United Nations are not as different as they are told,” he said. “They can be made to fear, they can be taught to hate, but they also respond to hope. History is littered with the failure of false prophets and fallen empires who insisted that might makes right, and that will continue to be the case. You can count on that. But we are called upon to offer a different leadership — leadership strong enough to recognize that nations share common interests and people share a common humanity.â€

The crisis in Syria was an opening focus for the POTUS, with emphasis on helping refugees and children of the conflict there.

Nearly 12 million people have been displaced by the conflict in Syria. As Americans, we can’t sit idly by. That’s not who we are.

We’ve provided more than $4.5 billion in humanitarian aid to help meet the needs of those impacted by the Syrian conflict.

We’re also increasing the number of Syrian and other refugees we admit to the U.S. to 100,000 per year for the next two years.

We’re also increasing the number of Syrian and other refugees we admit to the U.S. to 100,000 per year for the next two years.

Other global leaders, Xi Jinping, Vladimir Putin, Hassan Rouhani, and FranÃ§ois Hollande, will also speak on issues that affect their countries, including peacekeeping, terrorism, and strategies to fight extremists. The UN is live streaming events via their Website here.

Check out more updates from today’s speeches and debates, as well as related activities via social today:

What to expect today at the #UNGA? Here’s a short preview: http://t.co/8LMSxWFhGM pic.twitter.com/qkFPI7dth2

People are not as different as they’re told. They can be made to fear. But they can also respond to hope. #UNGA http://t.co/d2BzxYV4sf

Watch & share this #UN70 video shown to world leaders at the opening of the #UNGA General Debate on Monday morning. https://t.co/DRZGum7d7M

“We are prepared to assist in the eradication of terrorism and paving the way for democracy.â€—Iranian President #UNGA pic.twitter.com/QPF00klddX

Top line from Obama at #UNGA: The U.S. is willing to work with Iran and Russia on Syria.

A government that suppresses descent is actually a sign of “weakness,” says Obama. Wonder if he has abusive police in mind as well. #UNGA

Brave Elijah from Kenya speaking at the #UNGA tonight about children living with HIV. @UNAIDS pic.twitter.com/7uzQUMpnEb