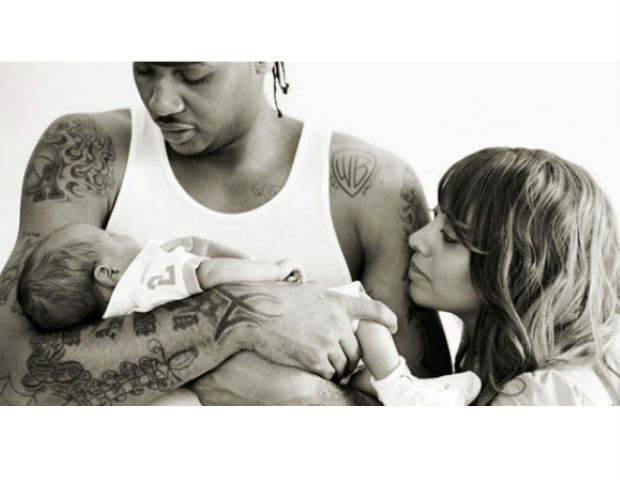 Lala and Carmelo Anthony might want the world to know that even though things are messy between them after it was learned the NBA player allegedly stepped out and got another woman knocked up, they intend on working together for the benefit of their kid.

And that’s understandable given that a grown-up’s mess-up shouldn’t shatter a child’s world.

On Saturday, their 14-year-old son Kiyan had the attention of both his parents during a basketball game in Miami, just days after Lala filed for divorce from Anthony after reports surfaced that a mistress allegedly birthed his newborns.

According to Hollywood Unlocked, an unidentified woman in Europe dropped alleged receipts of her rendezvous with Anthony. She also reportedly showed snaps of her newborn twins.

The woman also said that she knew Anthony was married but he “came off as single.” The lovebirds would even reportedly Facetime each other at night in the home he shared with the Power star, his wife Lala.

As previously reported, things heated up when Anthony’s side piece found out she was pregnant back in September. The 38-year-old woman reportedly planned to get a medically-induced abortion in Los Angeles, but Anthony reportedly wanted no parts of it.

The alleged sidepiece was also upset that Anthony hid her from Lala, his family, and the public.

The woman reportedly had the babies in April, two months before she was due in June.

Her baby boy is still reportedly in a London hospital.

The mistress reportedly feels like she got the short end of the magic stick, given that Anthony doesn’t want anything to do with her and his new babies. He does however reportedly takes care of his outside family financially and provides a place for his alleged baby mama to live. But the baby mama reportedly wants more.

Even though Lala slapped her husband with a divorce suit, she took to Instagram to give her baby daddy his props for being a good papa with a Happy Father’s Day wish.

“We spent all day cheering on Kiyan @blackopscadets at the Ballin on the Beach tournament. Super proud of my boy always,” Lala wrote in a caption on a pic of Anthony hugged up with his son.

“Happy Father’s Day Mel…Kiyan is blessed to have you as a dad.”