Universal Pictures Announces The 'Get On Up' Tour - Black Enterprise 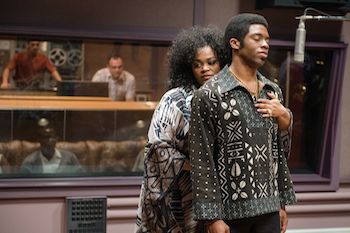 The people who brought you “Despicable Me” and “Jurassic Park” are adding a bit of funkiness to theaters around the country.

Universal Pictures announced in conjunction with their upcoming James Brown biopic, the launch of the “Get On Up” tour. The event will mark an immersive storytelling experience set to the sounds of James Brown’s legendary funk.

Beginning Friday, June 20, interested participants can jam out to The Godfather of Soul’s timeless hits and learn about his legacy in the process. The tour will journey throughout the United States this summer in anticipation of the film’s release that hits theaters on August 1, 2014.

“Our goal with the Get On Up Tour is to entertain audiences who were directly influenced by James Brown’s life, as well as to demonstrate to a new generation just how impactful he was, and remains, to modern culture,” said Talitha Watkins, vice president of Multicultural Marketing for Universal Pictures. “We want to engage fans in a way that authentically honors his legacy while bringing the fun and funk that he brought to global audiences.”

Intrigued fans and newcomers alike can experience all the hoopla as attendees can record their best impersonation of the Hardest Working Man in Show Business, bust a move on a dance area that casts colorful shadows, and peruse through a vinyl record tribute wall that shows off how James Brown inspired the masses.

Clips and behind-the-scenes footage from the “Get On Up” film will be made available, too.

If you’re in New York, the “Get On Up” tour will begin this week at the American Black Film Festival (June 20-22). After that, it will travel down to New Orleans for the 20th anniversary of the Essence Festival (July 3-6). The tour will return to New York on July 18.