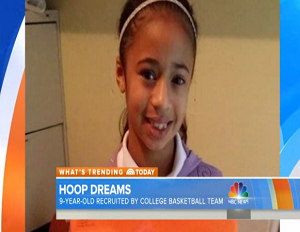 Unlike most 9-year-olds who are concerned with getting adjusted to the fourth grade and navigating through elementary school hallways, Jaden Newman is far ahead of the game with a talent that’s putting her on the radar of one of the nation’s biggest universities for sports.

Last week, Newman spent three hours touring the University of Miami, where the school’s women’s basketball coach urged the young athlete to keep the university in mind when it comes time for her to narrow down her college options.

Despite only being in the fourth grade, Newman, who stands at 4-foot-7-inches, has already played two seasons on the girl’s high school varsity team at Downey Christian School in Orlando. Her basketball performance against teenagers almost twice her age has gained national attention, with Newman averaging 14.5 points and 7.5 assists per game.

“It did surprise me a little bit,â€ her father and the coach of her basketball team, Jamie Newman, told TODAY.com. “When I first got the call [from Miami assistant coach Derrick Gibbs], I thought it was for my son. I understand why, though, because she has an amazing skillset at 9 years-old, and her potential is through the roof.â€

Newman is believed to be the youngest player ever to get recruited by a Division 1 college program.

Entrepreneur of the Week: Forrest Tuff, One Vision Productions