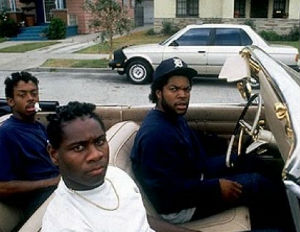 It’s hard to forget America’s favorite Black films, especially when there are eight reasons to think about them. EBONY.com recently took at look at some of Black culture’s most unforgettable and entertaining films, reminding fans of movie trivia tidbits they may have forgotten.

From Boyz N The Hood to The Color Purple, we bet there’s something you never knew you never knew. So, take a look at EBONY.com’s countdown of eight [un]known Black movie facts.

1) Boomerang‘s original script called for Marcus (Eddie Murphy) to lose both Jacqueline (Robin Givens) and Angela (Halle Berry). Apparently, one of (director) Reginald Hudlin’s friends advised him that the movie ending with Eddie getting no girl would have upset the audience. And, if the hundreds of thousands of young Black men who wanted to be an “ad exec” after seeing this movie (and wanting Marcus Graham’s life) are any indication, he was definitely right.

2) The list of actresses and entertainers considered for the role of Shug Avery in The Color Purple reads like a “Who’s Who?” of early 80’s pop culture. Tina Turner, Patti LaBelle, Phyllis Hyman, Lola Falana, Diana Ross, Chaka Khan, and Sheryl Lee Ralph all were considered for the role at one point. Basically, if you were a famous Black woman who happened to be in her mid 30’s to early 40’s and you weren’t considered for this role, you probably needed to fire your agent.

4) Ike Turner isn’t a very popular man. But, apparently, Angela Bassett is a very popular woman. Neither of these statements are Earth-shattering revelations. Ike Turner’s name is the go-to insult for men accused of hitting women (and wearing ridiculous hairpieces), and Angela Bassett has everyone’s favorite arms. Laurence Fishburne, though, drove home this point even further, as he turned down the role of Ike Turner in What’s Love Got to Do with It five times (five!!!) before finally agreeing…but only after hearing that Angela Bassett was cast as Tina Turner.