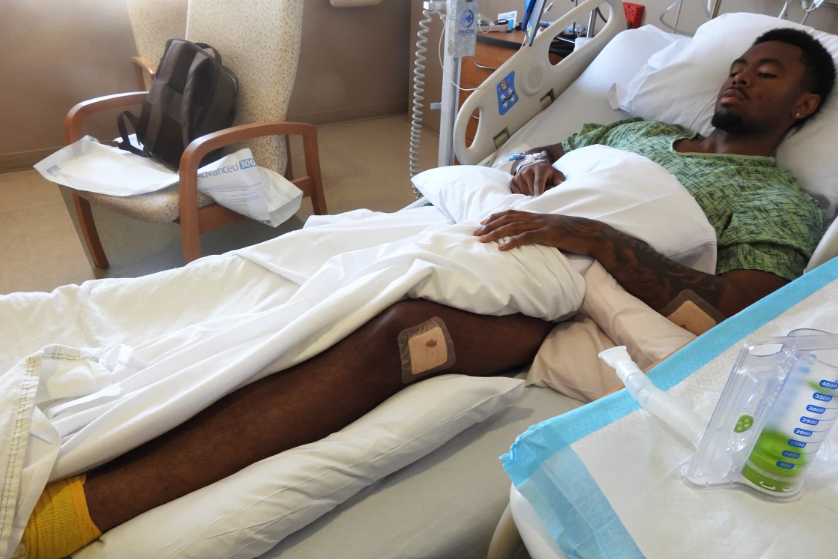 K’aun Green, the 20-year old who was gunned down by California police after disarming an attacker, is suing the city and the department for monetary and punitive damages.

BLACK ENTERPRISE previously reported that the college student and football star was shot several times after police mistakenly identified him as an attacker. Attorneys for Green said he’s a hero who acted immediately to save his life and everyone else involved in a fight at La Victoria Taqueria in San Jose on March 27.

The police department revealed that it thought Green was connected to a homicide that took place less than a mile way from the taqueria. But video footage confirmed that Green was indeed tussling with the attacker to disarm him.

Green’s injuries have resulted in multiple surgeries that could ruin his chance at an NFL career.

“Mr. Green is facing a long and uncertain road to recover the life he once lived, the sport he once enjoyed, and [the] dream he was moving ever closer to making his reality,” his attorneys said in the complaint. “The officer’s rash decision to shoot Mr. Green, who had done nothing wrong, has potentially jeopardized the young man’s promising future.”

According to the federal lawsuit, a fight broke out at the restaurant when a man “showing signs of being highly intoxicated” delivered a blow to Green’s face, ABC 7 reported. One of the man’s friends took out a gun on Green and his friends, but Green jumped to action by wrestling the gun away.

A third man got involved and assisted the other two men with attempting to retrieve the gun from Green, the complaint said. As Green was heading to the front door of the restaurant, one of the men tugged at his clothes, but Green managed to slip out of his grasp and back out the door.

Green was met with bullets as he held the gun pointing up in the air with his right arm.

The lawsuit cites that an officer shot Green four times without warning, nor did he get a chance to acknowledge the orders. After being taken to the hospital, the lawsuit also alleges that Green remained handcuffed and was restricted from seeing his family.

“They treated me like a criminal even though I saved my friends’ life,” he told NBC News.

He added: “It’s still surreal to me, it just hurts to know I can’t play football this year. I’m going to try my hardest to make a comeback.”

Another man involved in the brawl was arrested and charged for carrying a firearm as a felon.

Green’s legal team said the incident has “physically, mentally, emotionally, and financially” harmed the young football player. They are seeking compensation for Green’s wages and other income loss and medical expenses.