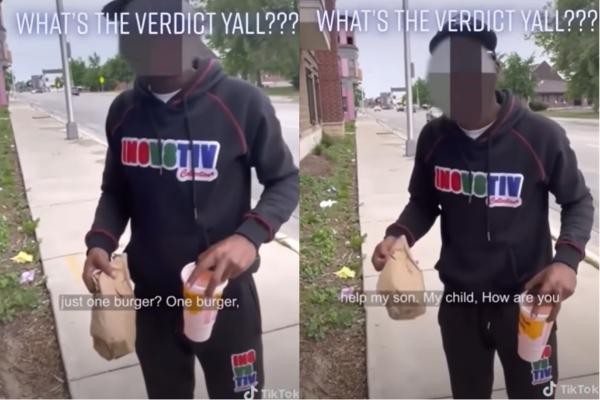 An upset baby mama sparked debate across social media when she decided to expose her baby daddy for buying McDonald’s for his son, but not her other three kids.

A video initially posted to TikTok but shared across social media shows the unidentified baby mama recording while venting about her baby daddy, who was arriving with food. Neither of their faces are visible in the four-minute exchange, but the heated conversation was enough to get everyone talking.

“My baby daddy come here with one f******g meal for my child, but I have three other kids,” she angrily explains.

“We have one kid together but he only want to come and bring one thing [from] McDonald’s. But what about my other kids.”

As the baby daddy approaches the front door, she points at the food, telling him it doesn’t look like there’s enough McDonald’s for all of her children.

“What about my other kids?” the woman asks.

“What about your other kids?” the baby daddy shouts back. “They ain’t my kids.”

His response only added fuel to the fire, prompting his baby mama to continue shouting and berating him while filming. She also reminds him that she doesn’t receive her food stamps until “the 11th.”

“But them your kid’s siblings, though!” she said in response.

“So my other kids fittin’ [are about] to be left out.”

The baby daddy tries to reason with his baby mama, explaining to her that he is only focused on feeding his son and isn’t responsible for her other children, since they’re not his.

“Where are their daddies,” the man questions at one point. “You had the other kids, they are your responsibility.”

In the middle of their continued bickering, the baby mama reminds her baby daddy that he knew what he was signing up for by impregnating her when she already had other kids.

“You knew what you were getting into when you had a baby with me,” she said.

In the end, the baby mama grabs the food out of her baby daddy’s hand and throws it on the ground. The heated exchange sparked debate on social media, with mixed reactions on which parent was in the wrong.

“Sounds like someone needs to learn how to spend they food stamps wisely,” added someone else.

While many understood the baby daddy’s stance, one user also questioned why he didn’t just “take the child out to lunch,” instead of allowing him to eat food in front of his siblings.