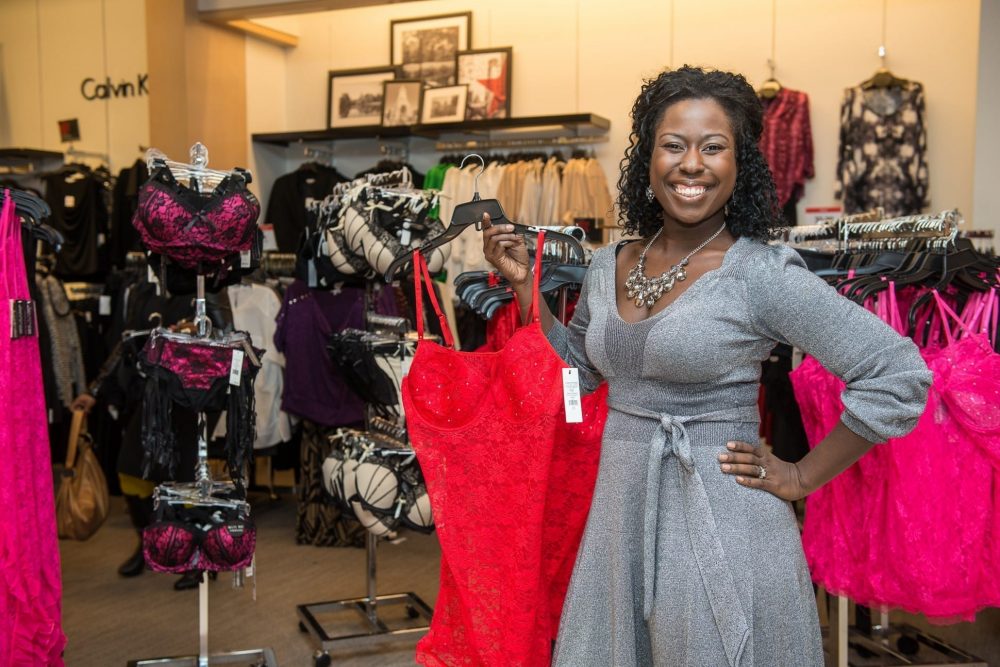 It is often said, “The Road to Success is never easy.”

Psychelia Terry, owner and founder of Urban Intimates, a lingerie and apparel company that caters to plus size women, learned that the hard way as she struggled to transform her small business into a titan in the retail industry.

Terry is a mother of two, with a third child on the way. She has been married for 10 years.

“Our company is the beauty and apparel company that really responds to plus size women’s confidence and their beauty,” she says. “We consider ourselves to be the company that is responding to her confidence and her beauty and just making her feel better whether that’s through skincare or through apparel. Once she wears our products she just feels better about herself.”

Her remarkable journey to begin living the dream took her from Michigan to New York, Kansas to Vegas and China to Dallas before finally getting her big break.

Terry started her company in 2009 after a business plan competition. “Back in grad school, my husband and I entered the competition and we lost severely and they told us to never, everÂ  start a lingerie company, that it was a terrible idea. We disagreed and we continued to press forward,” she explains.

She and her husband begged to differ. It was the first on a long list of setbacks that threatened to derail Terry from her dream.

“At the time we were buying lingerie and selling them on our website. I would have fish fries and have girlfriends over and try to bribe them into buying our lingerie,” she says.

Those early days and little impromptu soirees triggered an epiphany. It helped Terry develop insight into a new consumer base: Girls who were curvy and loved to feel beautiful. Terry decided then to start designing products based on their interest and their styles.

“The girls that were coming to these fish fries/lingerie parties were curvy. I originally was not curvy until I got pregnant. My pregnancy really helped lend the thought and process to what they were going through.” Terry says. “I had no idea what a girl with Double D boobs would go through at all because I was a B Cup which is much, much smaller. So once I had gotten pregnant and my body size changed, it allowed me to really see through their lens. And that was really the transition point of my just selling products from other companies to creating and designing my own product that these girls and myself could appreciate.”

The idea was born, but to take the business to the next level, they needed to come up with a new business plan. It was a transition that exposed them once again to the bitter taste of defeat.

They signed up for the Coors Miller Light business plan competition which offered winners a $50,000 prize to help fund their start-up. They lost. Twice.

“We wanted that $50,000 so bad we entered twice. We entered with like two different names and it was so funny, looking back now, because they wrote back saying this is the same concept that you submitted last year.”

Although they didn’t know it at the time, it was after this latest disappointment that their luck began to change.

“They felt so bad for us, I think because they could see our optimism, us wanting so badly to participate and to succeed that one of the judges and coordinators of the competition emailed us and said maybe check out this program.”

The Workshop at Macy’s

That program was the “Workshop at Macy’s.” Simply called the Workshop at Macy’s, it is an exclusive vendor retail development program designed to give select high potential minority and female business owners the tools to better succeed and sustain growth in the retail industry.

“The idea of the program is to build a pipeline of new entrepreneurs and resources that can benefit the entire industry. Helping companies acquire the tools and skills necessary to scale and really be sustainable in the industry.â€

Terry says, “We’d known nothing about the Macy’s program but we definitely had decided that we were going to go wholesale instead of being our own retailers at the time. We entered among another thousands and thousands of people, so I figured we had no chance. Plus, I’d just had a baby.”

The Macy’s program is so ultra exclusive, this year alone more than 38, 000 people logged onto the website when the application process started in September 2013. By February, just 1, 000 applications had been accepted. Of the 1, 000 applicants, Macy’s accepted only 12.

“After we made it through the acceptance process, we got to the workshop interview,” Terry says. “It is standard practice to go through these interviews and we laid it out to Macy’s about how much we really believed in this market place and how we believed in this curvy girl and how we really think it was an opportunity being missed and they agreed and they worked very closely with us to create a line for this girl.”

“We were in the first class of the Macy’s workshop and there were 22 other companies that were part of the class. Macy’s makes it really clear that being enrolled in the program didn’t guarantee your company will get an order from them. I mean, they were really clear about that from the start, and boy were they right,” says Terry.

She further explains,”The program was very challenging initially. Just understanding the information was an ordeal. It was such a fast pace of learning and I have an undergraduate degree in business and an MBA and an executive MBA. But that week of classwork was so direct and intensified. And then they topped it off with a pitch and presentation for your product. It’s not just learning about the company, you’re learning at the same time how to pitch your company to their company based on all the information you learned in class.”

During that time, Terry and her husband welcomed another baby.

“I continued to travel back and forth to New York from Texas. We kept showing our designs and the color schemes and the trends and breaking down in detail what we were looking to do and achieve. And they’ll say ‘well do you have this yet?’ And I’ll say, ‘No I don’t have that.’ It went on and on like that because I wasn’t at all ready to work with a major retailer such as Macy’s. We were more of a dot-com, selling to personal clients and friends and family. The workshop really gave us the know -how and the tools to fast forward the process, but it still took an additional two years for us and a ton of meetings.”

It was during these back and forth trips to New York from Dallas, that Terry realized that in order for her company to go big time, they would need a manufacturer. But before embarking on the journey to becoming wholesalers, she had to understand more about that sector of the industry.

“I found a lady that was a small boutique wholesaler out in Kansas and I opened a credit card, and cleared it to pay her to mentor me for three days. I bought a ticket to Kansas with my three-month-old son and we slept in her basement with her dogs and learned about lingerie and the practice of how to run a lingerie business,” Terry recalls. “And so we ate and learned during the day and we slept with the dogs at night all through the weekend. After that, just seeing her warehouses, seeing her designs, sitting down in that room and seeing her hard at work, it showed me that it could be done. It was a very expensive trip, but what I walked away with was a suitcase full of fortitude.”

Armed with the desire to do well and driven by her determination to succeed, Terry braced for the next stage in her journey. A trip to China to hunt down the right manufacturer. At this point, Urban Intimates did not manufacture its own designs. What they had been doing up till now was buying products, tweaking and redesigning, and then selling.

“We had to go find our own manufacturer and so my husband and I and our one-year-old son booked a trip to china to meet with manufacturers. That was another credit card. We really debated that. But in the end [we] decided to just buy the flights and go because it was a fantastic opportunity for us to do international travel on business and to really experience and understand what our MBA’s talked about.”

But they still had to conquer the language barrier.

“We met in China with a handful of manufacturers and through them we took samples, and styles. We didn’t not speak any Chinese. Not Mandarin, not Cantonese. We used Google translate to make sure we knew how to say ‘how much’ and ‘how to get to the bathroom'” Terry says. “And though it was another expensive trip, it was worth it. It wasn’t easy. We had some people that cut us off and dropped us back at the hotel because our order quantities were way too small and they were like, ‘Why are you even in China? Go back to America. What are you talking about? Get out of our office.’ So yes, that was our China trip.”

Armed with another suitcase full of fortitude after their experience in China, Terry and Urban Intimates were ready to meet once again with Macy’s.

“We met with Macy’s a few more times, outlying our proposals and finally they said yes, and we were just so elated,” Terry says.

But their jubilation was short-lived, Macy’s called back and retracted the offer, suggesting Urban Intimates make more changes.

It was a big blow, after having come so close, but after a whole lot of tears, Terry went once again back to the drawing board. And then in August 2013, Urban Intimates finally turned the corner and the dream inched closer to becoming reality.

The Sweet Taste of Victory

“Finally, like three months after the disappointment of having the rug pulled out from under us, we got a sensible meeting with them and and then, incredibly, they said ‘We are going to launch you in ten of our doors,'” Terry says. “We had launch parties with celebrities and celebrities on top of celebrities and we got a chance to fly around coast-to-coast and meet with different store managers and customers, and really speak about our brand. It was a beautiful experience.”

In the end, her grueling experiences on the road, fighting to take her business from conception to fruition, gave her a vital takeaway – the confidence that it could be done. She looks back on lessons learned during that one week spent in the Workshop at Macy’s program.

“To be looked at and considered a real brand that actually had the ability to sell to the larger department stores in the U.S., I took that away and used that same confidence to sell our skincare brand to other retailers and line up other retailers for our lingerie brand,” Terry says.

“We are in 10 Macy’s doors and we are in about 3, 000 retail doors across the United States with all of our various brands. It still is a surprise to us. I still to this day consider myself a little black girl from an inner city ghetto in Michigan that just had a dream and I really definitely expound to people that have dreams to make sure they are able to bring depth to their dream and meaning, “Terry says. “Do the research for the dream, make sure you do the footwork and once you’ve done that, people in very high places will begin to recognize that charisma and will want to attach themselves to you.”