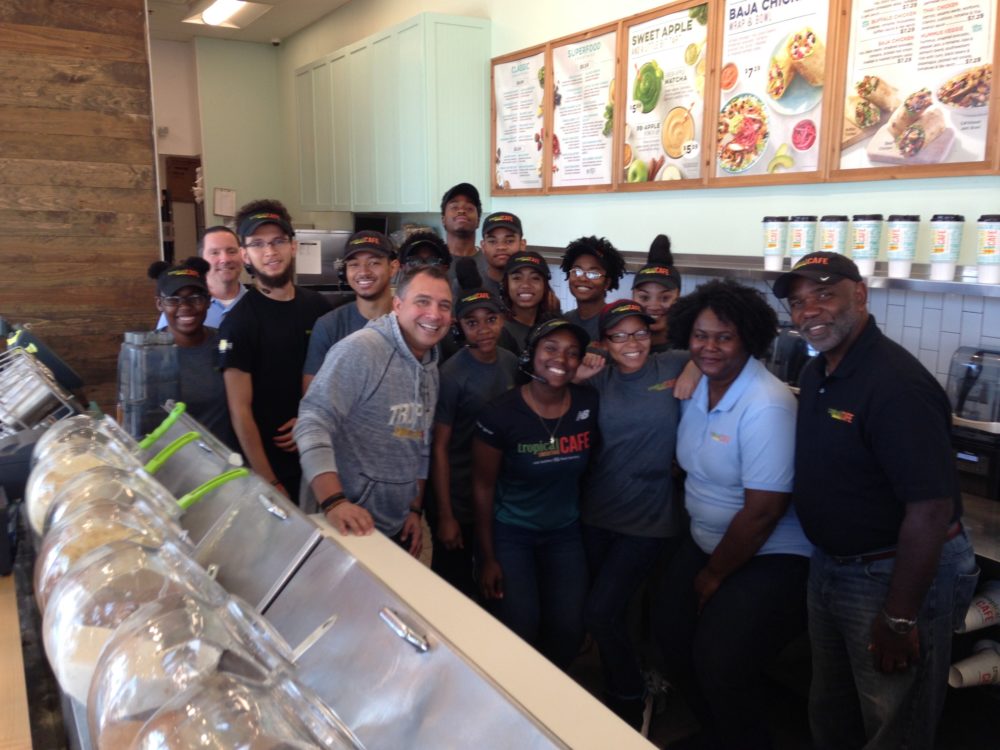 It’s proven through entrepreneurship, that anyone can succeed without ever owning a prior business or having any additional background or skill set to support an initial dream. You can start with extremely humble beginnings, but with a strong passion to work for yourself, you can create your own path. That is exactly what happened with Clement Troutman, Navy veteran and franchise owner of family-operated Tropical Smoothie Café located outside of the nation’s capital in Capitol Heights, Maryland.

“I started with humble beginnings but it’s at those moments where you can look into the mirror and see a ‘boss.’ Listen to what your heart says more than your mind. You’ll have the feeling that all things are possible.” –Clement Troutman

The business is a family affair that makes up the Troutman alliance, consisting of his wife Jackie, daughter Jocelyn, and son Jordan. “They are my secret weapon. Our crew, aka ‘The Dream Team,’ allows me to be out there doing what I do through their exceptional service to our customer base day in and day out. We are in this together,” says Troutman.

At the beginning, both Troutman and his wife were still working full-time in government contracting. Their daughter was the one who grabbed the reins, navigated, and ran the business in the early days. Soon thereafter, the family identified and harnessed their unique strengths to leverage the business mission and actualize the dream. Jordan Troutman, a computer scientist, was instrumental in coordinating the buildout of the complete infrastructure on the technical side of the operation, including scheduling, pricing and offline/online order processing systems.

So, why Tropical Smoothie Café and not Chick-fil-A or Burger King? Daughter Jocelyn, a business marketing major at Howard University, was the brainchild behind selecting the smoothie industry as the market of choice based on her research. She lost over 60 pounds in college while working out at LA Fitness—the facility had a smoothie stand for members, and she was hooked. This also served as inspiration to go into the smoothie business, concluding that the smoothie industry was strong and had great potential for expansion.

Today, consumers are more aware and concerned about their food choices and clean eating habits. Offering organic smoothies, wraps, and sandwiches, the family wanted to provide unique, made-to-order options that support healthier lifestyles. These options were highly attractive alternatives to the fatty burgers, fries, and malts that Troutman grew up on. And although he had no franchise experience or background, he knew that this business model was scalable.

“Franchising gives you the opportunity to become a business owner, to see if you can follow a model, but own it at the same time! Although, there are corporate policies, we still make final decisions at the end of the day of what happens within our franchise.” –Jocelyn Troutman

Some of the initial challenges faced early on were more about finding the right location. After consulting with some fellow franchisees, Jackie knew that they had to secure a facility with a drive-thru. “We’ll know when we have the right location.” She recalls the night when they all woke up around 3 a.m., during a snowstorm, to take a look at a potential location after learning that it was available. After aiming their high-beams into the front window of a construction shell, they knew instinctively that the facility was the right one for the vision.

The Troutmans officially opened their doors to the public in February 2017. Their franchise started out at 555th out of 650 Tropical Smoothie franchises in terms of weekly sales volume. After the first week in business, the Capitol Heights store skyrocketed from No. 555 to No. 7 in the country. In the second week, they moved from No. 7 to securing the No. 2 position in the company. In 2017, they were open for a total of 44 weeks, out of which they were No. 1 for 37 of those weeks.

“There’s an excitement in the community. When people find out that we are the owners, it changes how they think about it, and how excited they are that we look like them.”–Jackie Troutman

Always serving the local citizens and surrounding communities in excellence, the Capitol Heights store has been an award-winning role model not only for residents of local communities but also to other Tropical Smoothie Café franchises throughout the country. Current plans are rapidly underway for a second location about 20 minutes away in Prince George’s County, Maryland.