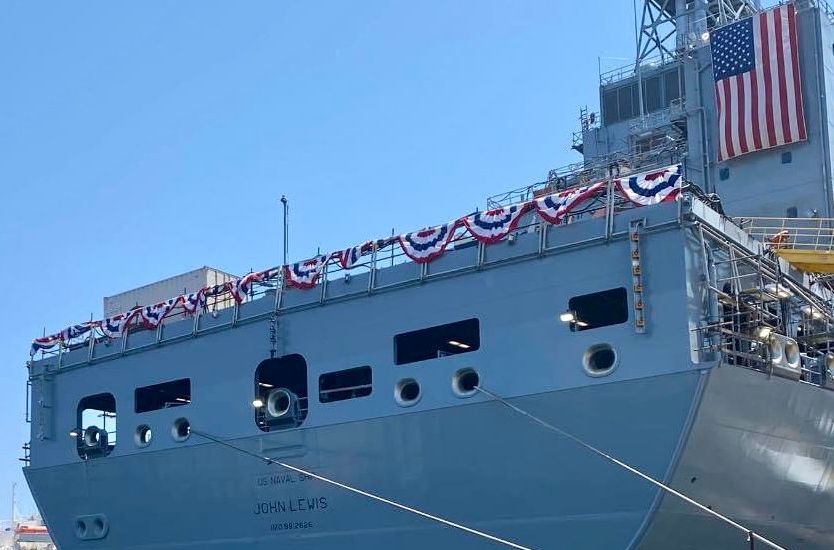 America has just celebrated the one year anniversary of the death of civil rights icon, John Lewis. The Navy took it a step further when it broke a bottle of sparkling wine across the bow of a Navy oiler ship that was christened the USNS John Lewis in San Diego.

According to CNN, on Saturday, July 17, the US Navy christened one of their new oiler ships the USNS John Lewis a year after the death of Congressman John Lewis.

“It’s fitting that we honor John Lewis with this formidable ship, because John Lewis was a warrior. One of the mottos of the Navy is ‘Semper Fortis’ – ‘Always Courageous’ – and John Lewis was indeed always courageous,” said House Speaker Nancy Pelosi, who led a congressional delegation to the event on Saturday. “This ship will be a beacon to the world reminding all who see it of the persistence and courage of John Lewis.”

The USNS John Lewis is a 742-foot-long vessel that is designed to transfer fuel to US Navy carrier strike group ships operating at sea, according to the Navy. The Navy has also stated that future John Lewis-class oilers will be named for other prominent civil rights leaders Harvey Milk, Earl Warren, Robert F. Kennedy, Lucy Stone and Sojourner Truth.

“Civil Service Mariners will operate this ship with the skill, resolve and courage displayed by John Lewis. With this ship, our naval service is better positioned to meet the challenges that lie ahead,” said Rear Admiral Michael Wettlaufer, commander of Military Sealift Command.

Known as the “Conscience of Congress” for his unyielding battles for racial equality, voting rights, and human rights, he remained a powerful political force even after he announced that he had stage 4 pancreatic cancer. He was 80.