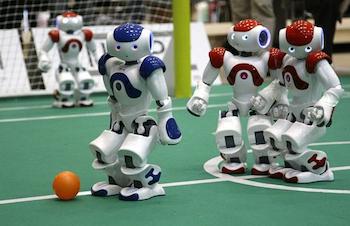 With the hype of the World Cup Tournament in full swing, Americans are focused on Team USA and their attempt at being number one on Earth.

Unbeknownst to many, Marquette University will send its own American team to play in a soccer tournament in July – but the players won’t be human! At this year’s Robocup, “Sonny,” an autonomous humanoid robot will compete against other robots to prove who is the best cybernetic creation.

In addition to Sonny, another yet to be named robot was created in the Humanoid Engineering and Intelligent Robotics Lab – better known as HEIR Lab.

Marquette University students create a 3D model on the computer, and then invent the parts via a 3D printer, which takes six to eight hours to complete. “There’s no limits to what we can do with our creative minds,” Dr. Andrew Williams, director of the HEIR Lab, said. “It’s been a great experience to see that everyone brings their talents, their perspectives to the table and everyone’s valued and important in making this reality,” he said.

Marquette University’s team is the only American qualifier in the teen size division of Robocup, which has been going on since 1997. The event’s overall goal is to create a team of robots that would compete against whoever the World Cup champions are by 2050.