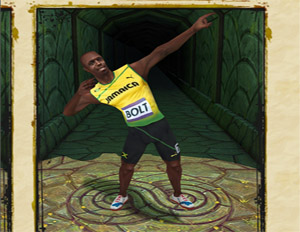 Thanks to Imangi Studio, the game developer behind “Temple Run,â€ gamers can now run as fast as Usain Bolt in the sequel to the popular game, “Temple Run 2.â€ Bolt is now a playable character in the endless running game available on Apple and Android devices.

Similar to the London and Beijing Olympics, Bolt is sporting his green and yellow Jamaican uniform and leaving his competitors in the dust in the video game. Bolt has special abilities that allow him to run faster than other characters while collecting coins during boost mode. For a limited time, players can add Bolt to their game for 99 cents.

The 26-year-old, who specializes in the 100- and 200-meter sprints as well as the 100-meter relay, is a huge fan of the Temple Run franchise and told USA Today that it “is fun and a little crazyâ€ to see himself in the game.

The game’s developers were happy to have Bolt onboard. “This seemed like the most obvious and fitting partnership,” says Imangi co-founder Keith Shepherd in a statement publicizing the Bolt update. “Personally, we are huge Bolt fans and watched him race to gold last year in London. We cannot think of a better personality and role model to represent the game and encourage our players to keep running.”