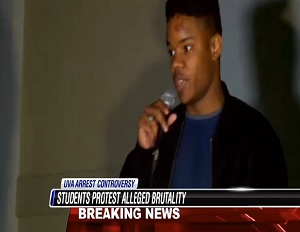 Image: Student Martese Johnson speaking at the protest that erupted after his bloody arrest (NBC 12 News)

The University of Virginia campus is outraged after a cell phone video went viral of the bloody arrest of 20-year-old student, Martese Johnson.

Johnson, who is a UVA junior and leadership development chair of the school’s Black Student Alliance, was caught on video being flung to the ground outside of Trinity Irish Pub in Charlottesville, Virginia at 12:45am Wednesday. According to the Virginia Department of Alcohol Beverage Control, the arrest was made after Johnson was refused entry into a licensed establishment. However, Johnson’s attorney, Daniel P. Watkins, said in a statement that “contrary to early police reports,” his client wasn’t accused of having a fake ID during the incident and that Johnson was forced to the ground prior to handcuffing him, “striking his head on the pavement and causing him to bleed profusely from the gash on his head.” According to court records, Johnson was charged with swearing/intoxication and obstructing justice. He was treated with 10 stitches in his head and later released from the hospital.

In response to the incident, UVA protesters marched the streets surrounding the campus chanting “shut it down” and “black lives matter.”

[Related: Charges to be Dropped Against Student Attacked by Norfolk Police Dogs]

Brinaka Scott, a friend of Johnson, witnessed the arrest and told NBC 12 News that she was shocked to have seen him on the ground in handcuffs.

“We were all just shocked because it was Martese,” said Scott. “He is not a forceful person. He’s not violent at all.”

Johnson, who is a member of UVA’s Honor Committee and Kappa Alpha Psi Fraternity, recently posted on Facebook a response to the racist song sung by the fraternity members at Oklahoma saying, “This is why things like Black Greek organizations, Black mentorship programs, and Black professional networks still need to exist.”

Since the incident, UVA President Teresa Sullivan has urged anyone who witnessed the arrest to come forward. She has asked Virginia Gov. Terry McAuliffe to conduct an investigation of the case and wrote in a statement that the students, staff and faculty “stand unified in [their] commitment to seeking the truth about this incident. And we stand united in our belief that equal treatment and equal justice are among our fundamental rights under the law.”