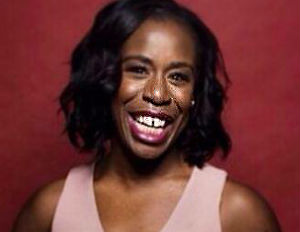 The actress, shining bright in a yellow Angel Sanchez gown, dropped her jaw in awe and grabbed her heart when Bryan Cranston announced her as the winner for Outstanding Performance by a Female Actor in a Comedy Series.

“Oh, my God. I really truly do not know what to say. I want to say thank you so much to the Screen Actors Guild for this incredible honor. I want to thank Jenji Kohan for writing a show like this and putting something like this on television, not just for myself, but for our incredible team of actors to be seen in such a beautiful way,” said an emotionally shaken Aduba. “I want to say a huge massive thanks to our cast, without whom this is not possible. I love you guys so desperately, so much. This is not done without you, at all, any step of the way.” Before taking her seat, she thanked her family and friends and expressed her love for all of the talents in the room.

The first-time SAG winner also made history as the first African-American woman to snag the award. She pushed past TV heavyweights Julie Bowen (Modern Family), Edie Falco (Nurse Jackie), Julia Louis-Dreyfus (Veep) and Amy Poehler (Parks and Recreation). The night marked another historic win as Viola Davis was the first black actress to win Outstanding Performance by a Female in a Drama Series.