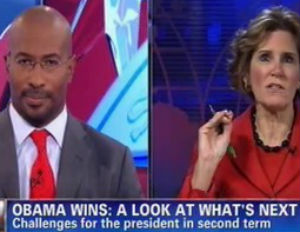 Van Jones, a former White House adviser to President Obama, appeared on CNN with the Republican strategist Mary Matalin to discuss what President Obama might do in his second term.

But while Jones said that the president’s second term offered a rare opportunity for compromise, Matalin spent most of the encounter railing at the tone of Obama’s campaign, calling it “divisive” and “destructive.”

To say that this was simply a case of being a sore loser would be a tremendous understatement. Matalin lost her ever-loving mind and basically responded to Jones like a spoiled brat. The level of disrespect that radiates off of her is astounding and yet not surprising at all.

Could you possibly imagine Van Jones speaking to her in the same manner and not having the right-wing media setting him on fire?