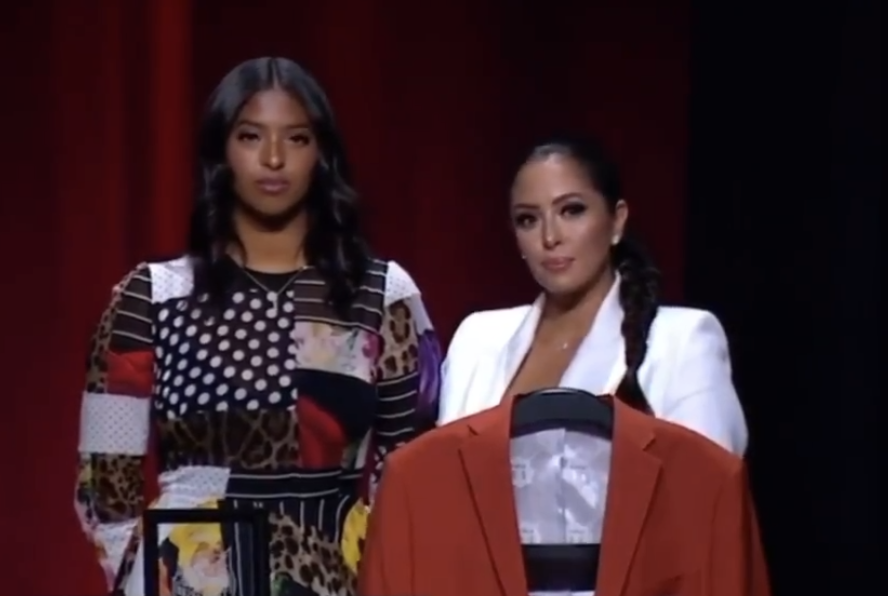 On Saturday night, Vanessa Bryant, the widow of the NBA star Kobe Bryant, accepted her late husband’s admission into the Basketball Hall of Fame Class of 2020, according to ESPN. The ceremony took place at Mohegan Sun Casino in Uncasville, Connecticut.

Bryant shared the honor with their daughter Natalia. After Kobe’s induction to the NBA Hall of Fame was announced, Bryant put Kobe’s jacket on her for a touching moment.

Vanessa and Natalia Bryant received Kobe’s Hall of Fame jacket, and chants of “Kobe” started in the crowd

What an amazing moment. 🙏❤️

Bryant praised her husband during her poignant acceptance speech, saying that he was “still winning” even in death.

“I used to always avoid praising my husband in public because I felt like he got enough praise from his fans around the world and someone had to bring him back to reality,” she said. “Right now, I’m sure he’s laughing in heaven because I’m about to praise him in public for his accomplishments on one of the most public stages. I can see him now, arms folded, with a huge grin saying, ‘Isn’t this some s—?’”

Kobe’s idol, NBA legend Michael Jordan, stood by her side as she spoke. Jordan presented Kobe into the Hall of Fame.

The widow also expressed that Jordan was Kobe’s inspiration as a player.

“People don’t know this, but one of the reasons my husband played through injuries and pain was because he said he remembered being a little kid, sitting in the nosebleeds with his dad to watch his favorite player play,” she said as she looked at Jordan. “He could recall the car ride, the convos and the excitement of being lucky enough to have a seat in the arena. Kobe didn’t want to disappoint his fans, especially the ones in the 300 section that saved up to watch him play, the kids with the same excitement he once had.

“I remember asking him why he just couldn’t sit a game out because he was hurting. He said, ‘What about the fans who saved up to watch me play just once?’ He never forgot about his fans. If he could help it, he would play every minute of every game. He loved you all so much.”

Bryant, primarily, spoke about her husband with respect to the man he was– not just his game.

Bryant also was sure to thank his haters.

“I don’t have a speech prepared by my husband because he winged every single speech,” she said. “He was intelligent, eloquent and gifted at many things, including public speaking. However, I do know that he would thank everyone that helped him get here, including the people that doubted him and the people that worked against him and told him that he couldn’t attain his goals.

“He would thank all of them for motivating him to be here. After all, he proved you wrong.”