Venus, Serena, Head to Soweto To Give Tennis Lessons To Kids 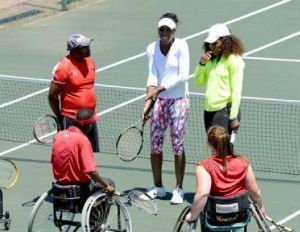 Venus and Serena Williams, Â who together have been the dominant force in American tennis for the past decade, recently went to Soweto, South Africa, to give a clinic on the sport to the young kids there.

The Williams sisters have traveled to South Africa to promote the sport among Africans, and especially girls, after a similar visit to Nigeria earlier this week.

Organisers of the tour, called “Breaking the Mouldâ€, hope to inspire girls to reach for their dreams in a continent where women’s rights often lag behind.

“Having the opportunity to show these women you can break the mould … can really create champions,â€ Serena told an earlier media conference.

“Obviously there’s tonnes of potential in town here on this continent,â€ her sister Venus agreed.

Some have grabbed onto their message in this formerÂ blacks-only suburb southwest of central Johannesburg, where the country’s first black president Nelson Mandela and Nobel Peace Prize laureate Desmond Tutu used to live.

“Here at the courts they call me Little Serena because I have what it takes to be her,â€ says Mmabatho Makgale, 12, after playing on the star’s side in a mini-doubles match against Venus’s team. Team Serena won.