Veterans Taking A Tour Of Duty As Franchise Owners 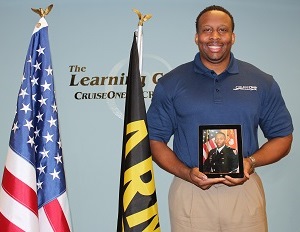 Larkin Frazier of Nashville, Tennessee, started his military career right out of college. He went in as a commissioned officer for the armed forces, serving from 2000 to 2004, including a deployment to Iraq as part of Operation Enduring Freedom. Frazier has transitioned from the military to civilian life and corporate America, cutting his teeth in the healthcare sector. “I’ve been at the corporate grind for over 11 years. I started my career with Johnson & Johnson, and currently, I’m at Abbott Laboratories [selling medical devices],â€ says Frazier, who holds an M.B.A. in healthcare management from Walden University.

In addition to traveling for the military, or what was endearingly referred to as an “‘all-expenses-paid trip to the Middle East’ courtesy of Uncle Sam,â€ Frazier was a seasoned traveler, according to the CruiseOne Franchise blog. However, he had never taken a cruise–that is, until he came across an issue of Black Enterprise, which advertised the launch of the CruiseOne/Dream Vacations contest, Operation Vetrepreneur: Become Your Own General.

Since 2011, home-based travel franchise CruiseOne/Dream Vacations has given away $250,000 in franchise opportunities to 20 military veterans via its Operation Vetrepreneur: Become Your Own General contest. Exclusively open to members from any of the five branches of the U.S. military (Marine Corps, Army, Navy, Air Force, and the Coast Guard) that are retired, off active duty, or who are honorably discharged, the Operation Vetrepreneur contest awards select veteran applicants with their own CruiseOne/Dream Vacations franchise. Valued at $12,700, each grand prize includes a complimentary franchise, with a waived $9,800 initial startup fee and monthly service fees.

Once the winners are announced, the “new recruitsâ€ are required to report for “active dutyâ€ in November for a weeklong franchise training boot camp at the Fort Lauderdale, Florida, headquarters. After studying the CruiseOne franchise model from afar for two years; meeting with a business development specialist to learn more about long-term opportunities of the franchise; and then venturing out on his first cruise ship voyage, a Royal Caribbean cruise out of San Juan, Puerto Rico, to the southern Caribbean; Frazier tried his luck at entering the contest. “I compared CruiseOne to other similar franchises and home-based concepts,â€ Frazier says. “I looked at the price and value proposition of the total investment, as well as the type of support [offered from the home office].â€ In 2015, Frazier was one of five vets selected as winners.

“Technically, my franchise has now become a ‘sideline business,’ and though I’m not at a point where I can comfortably walk away from my job, I’m now in a better position to understand and see what the fruits of my labor can yield,â€ Frazier says.

Getting Your Feet Wet

Before buying any franchise–part-time or full-time–get full disclosure. Would-be franchisees should thoroughly read the franchise disclosure document (FDD) provided by the franchisor. “After I went through CruiseOne’s Franchise Disclosure Document, I had exposure to every single franchisee. I was able to call, speak to them, and engage them with very pointed questions,â€ Frazier says.

Things to look for: What is the initial investment cost, plus franchise fees? What are the obligations of both the franchisor and the franchisee? Does the franchisor offer financing and/or marketing assistance? You can use the FDD to get current and former franchisee’s contact information and get their feedback on running the business and working with the franchisor, in terms of ongoing support.

Frazier notes that it is “important to find a model that best aligns with your personal values.â€ As a franchise owner, he says that he has found success in two niches: families with smaller children looking for vacations and couples seeking destination weddings or honeymoon vacations. “I think the biggest thing is paying attention to detail, and giving people exactly what they ask for.â€