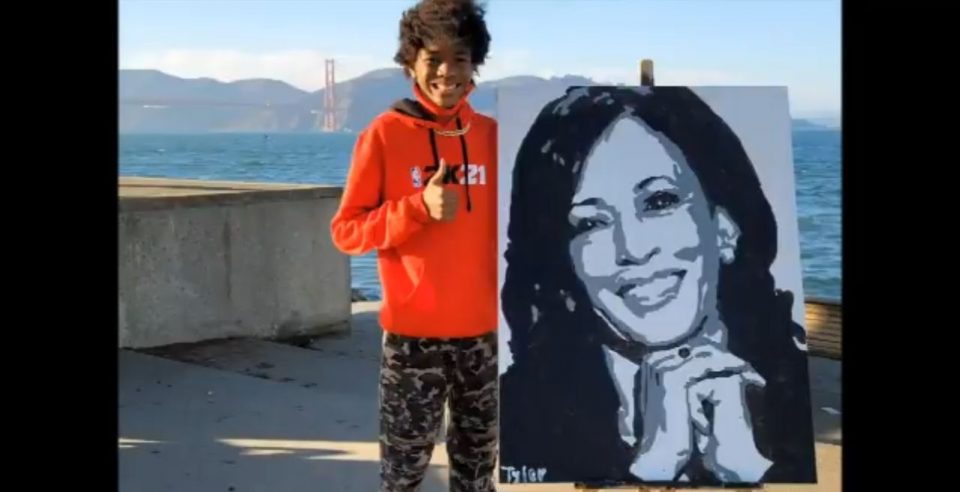 The excitement of a Black woman becoming Vice President of the United States has sent a shock wave of amazement, support and happiness among the people. Barack Obama becoming president was definitely an achievement that is still being heralded among people of color and now Senator Kamala Harris reaching a pinnacle not even thought about in recent years has energized people, specifically the youth in acknowledging this feat.

This accomplishment gave a young Bay Area 14-year-old teenager, Tyler Gordon, the inspiration to utilize his artistic talents to place an image he drew to canvas. The young painter then posted, on his Twitter account, a clip of him painting the image of Harris and he tweeted the photo to her as well as he asked his followers to retweet and tag her for the possibility of her seeing it.

@KamalaHarris My name is Tyler Gordon and I’m 14 years old and I live in the Bay Area! I painted this picture of you and I hope you like it!!! Please Rt and tag her so that she can see this. Please!!!@JoeBiden @DouglasEmhoff @SenKamalaHarris @WeGotGame2 pic.twitter.com/X0qtChKBf2

Thank you so much Mrs. @KamalaHarris it was amazing talking with you today!!!
Also thank you Mrs. @ChelseaClinton for believing in me and helping me to reach Mrs. Harris!!! pic.twitter.com/5eA6Oy2WtG