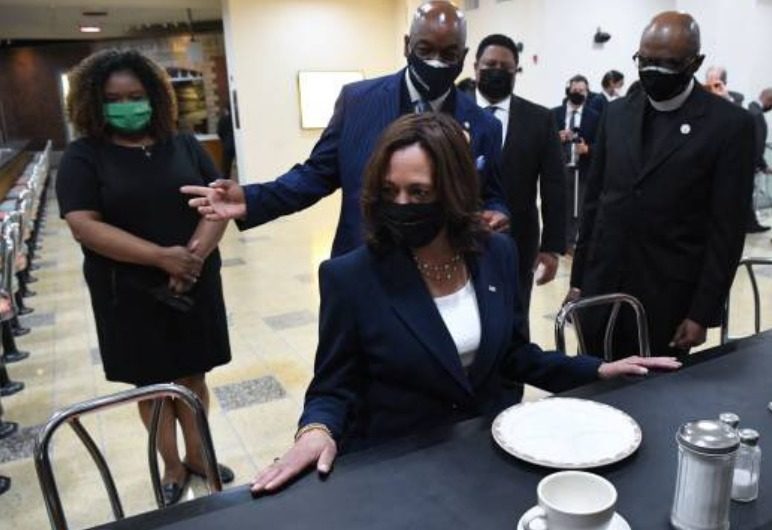 Vice President Kamala Harris took time out of her busy schedule for a history lesson Monday as she visited the iconic International Civil Rights Center & Museum in Greensboro, NC.

The museum commemorates the historic action of February 1, 1960, when AT&T State University students David Richmond, Franklin McCain, Ezell Blair Jr. (now Jibreel Khazan) and Joseph McNeil—aka “The Greensboro Four”— sat at the all-White lunch counter at F.W. Woolworth’s five-and-dime. The non-violent action “challenged America to make good on its promises of equality and civic inclusion enunciated in the Constitution,” according to the museum’s website.

The museum now sits on the site of that famed Woolworth’s.

Some younger Americans may not be familiar with this act of bravery. African-American students staged sit-ins, refusing to leave when service was denied. According to History.com, the civil rights protest spread to college towns throughout the South. Action taken by protesters led Woolworth and other establishments to  segregationist chance policies. Thus, Harris’ visit may serve as a teachable moment for individuals who are unaware of the movement’s monumental impact.

“Harris briefly took a seat at the counter—the original Woolworth’s counter—then proceeded to tour more of the museum with officials,” The Charlotte Observer reported.

According to the paper, Harris was in the area due to giving an economic speech at Guilford Technical Community College. Additionally, she toured Thomas Built Buses in High Point to promote the American Jobs Plan. The primary reason for Harris’ visit to North Carolina, according to News4Jax, was to plug President Joe Biden’s $2.3 trillion infrastructure plan.

According to CNN, the roughly $2 trillion proposed plan laid out by Biden addresses American’s infrastructure which is in need of repair, such as roads and bridges. The president said that the investment would create jobs and and help the nation compete better for opportunities.