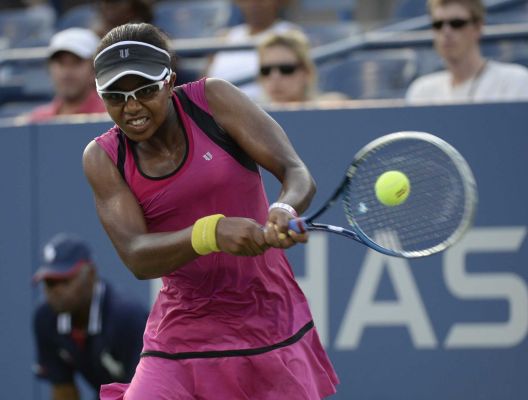 Victoria Duval has captured the attention of the sports world with her outstanding play this week.

The Guardian newspaper called them “odd-ballâ€ glasses. Sports Illustrated called them “quirky.” The Daily News said they were “funky.â€’

Yes, for all of her stellar play here at the US Open after a breathtaking win over 2011 champion Samantha Stosur Tuesday night, many observers can’t take their eyes off … Victoria Duval’s glasses.

It’s easy to see why. With all the options available to top-flight athletes to improve their vision, it’s a rarity to see an individual athlete wear goggles on the court or field of play (Unless that sport was say, field hockey, womens lacrosse … or swimming). But for teenagers, experts say that LASIK corrective surgery is usually not a good idea. Most teens receive the procedure to repair severe abnormalities.

Doctors say that since most teenagers’ bodies are still developing, procedures such as LASIK are discouraged.

And as evidenced by Duval’s struggle in the past year with her serve: she’s actually still growing.

“My serve is getting better,â€ she said, acknowledging she had zero aces against Stosur. “It’s definitely better than it was last year but I’ve gone through a couple of stages of struggling with it because I’ve been having a couple growth spurts and I think my balance is a little off.â€

Tiger Woods was said to be so severely nearsighted that he said he was considered legally blind without glasses or contacts. He received a first procedure in 1999 — at 28 — after which he won his first tournament, the Wachovia Championship at Quail Hollow in Charlotte. Woods got another procedure in the spring of 2007.

It’s not immediately clear why Duval doesn’t wear contacts. There could a comfort level with the goggles; Woods, for instance, complained that they were often irritable to his eyes under windy conditions.

And there’s this little tidbit from the FDA: “Currently, no lasers are approved for LASIK on persons under the age of 18.â€

Vision aside, Duval seems to have a good head on her shoulders — and doesn’t seem to be taking herself too seriously, despite the media’s repeated attempts to bring up her poignant and sometimes tragic backstory.

“I’m very goofy off the court,â€ she said Tuesday. “I think I’m very much of a child at heart. But on the court you have to be a warrior because that’s just the [nature of the sport]. Off the court I think it’s important to have fun and be a good role model for other people.â€