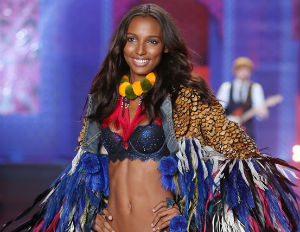 1. Maria Borges
The Angolan fashion model was born in 1992 in Luanda, and was raised by her siblings during the Angolan Civil War. After being discovered in 2010, placing second at the Angolan edition of the Elite Model LookÂ contest, Borges was named Forbes Africa’sÂ top model of 2013. After strutting the VS runway in 2013 and 2014, she made history in November 2015 by becoming the first black model to walk theÂ Victoria’s Secret Fashion Show while wearing her natural Afro hair.Â “I told my agent I wanted to walk in the Victoria’s Secret show with my natural hair,â€ Borges told Essence Magazine. “I was nervous, but I had to do it. When they said ‘yes’ I didn’t expect it, but I was so happy.â€

Her best advice for women unsure about wearing their natural curls? “Be strong. If you say you’re beautiful without hair and makeup, then they will believe you. It’s about being confident and always being yourself.â€