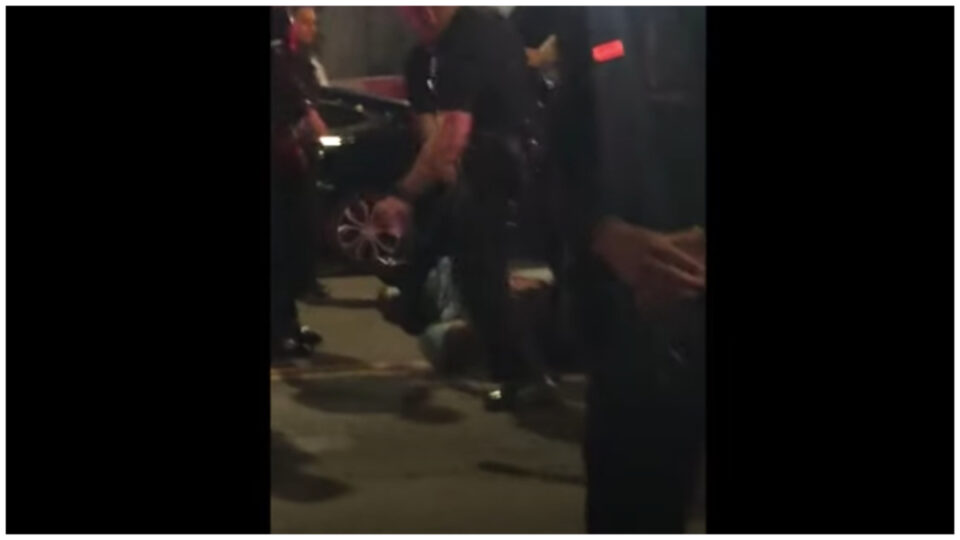 A video recorded by a California woman captured an officer from the Los Angeles Police Department kicking a man in the head during an arrest on July 3.

According to CBS News, the LAPD was responding to a battery report near the 1600 block of Cahuenga Boulevard in Hollywood around 7:15 p.m. at a marijuana dispensary.

The video begins with at least six officers from the LAPD standing by a police vehicle as several officers remove a handcuffed male suspect from the police car and place him on the ground. The officers are shown struggling with the man to apply leg restraints before one of the officers is seen kicking the man’s head before eventually getting him back into the patrol vehicle. One person in the crowd reportedly yelled at the officer.

The bystander said she was disturbed by the incident. “You see stuff like this on TV, but when you actually see it live and in front of you, it is gut-wrenching because there is nothing you can do to help,” she said.

“People need to see what’s happening. This happened on a busy street and in front of many people. It makes you wonder what happens in dark alleys and corners. The public has been demanding accountability.”

The woman recording the video also said she felt helpless as she witnessed the assault and shared the footage with the Orange County Register. She said she had been on her way to a human rights vigil on Sunset Boulevard when she heard police sirens and thought they had something to do with the vigil.

According to the LAPD Officer Drake Madison, all use of force was warranted in the incident.

“While taking the suspect into custody there were several separate use-of-force incidents,” said Madison. “At one point, another male becomes involved when he tried to free the original suspect from the police. There was a use of force with that suspect as well. All the use of force with the suspects was reported as required.”

Madison added that a use-of-force investigation would be conducted.