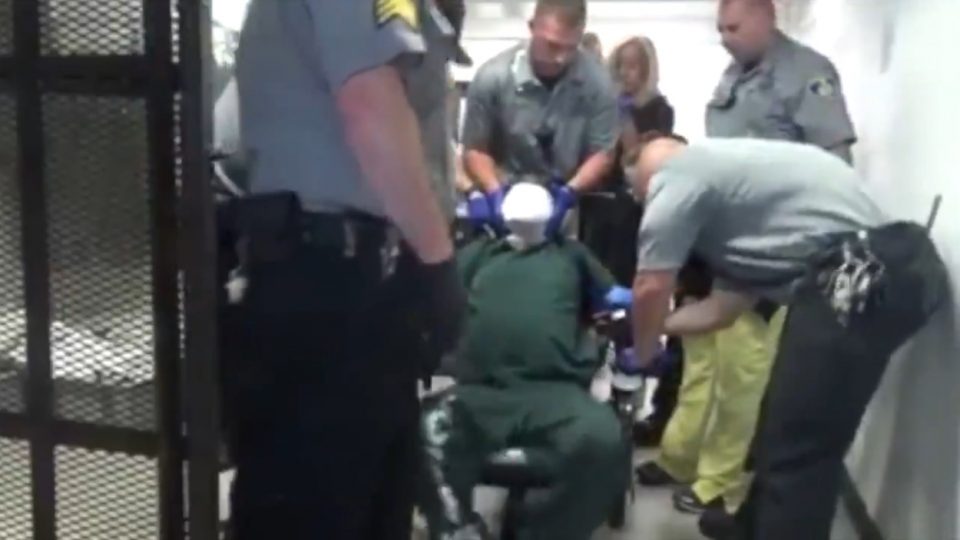 In another shocking case caught on video, a 41-year-old man died in a jail cell as experienced an epileptic seizure. The video shows several correction officers not aiding him until it was too late, according to News One.

According to the medical examiner’s report, Shaheen Mackey, who was an inmate at the Luzerne County Correctional Facility in Wilkes-Barre, Pennsylvania, died of natural causes.

WARNING: DISTURBING. Shaheen Mackey had a seizure at Luzerne Co. Correctional Facility. Staff covered his face with a spit mask, cuffed his hands behind his back, shackled his feet, and STILL tased him. By the time they realize he was dead, it was already too late… Sickening!! pic.twitter.com/Hgw2tmsjJC

The incident took place back in 2018, but this footage was leaked this week by the husband of a woman who is the administrator of Mackey’s estate. The video was released just weeks after a $3 million settlement was reached between the county and Mackey’s estate.

“This incident began with one inmate witness, who said he feared for his life, screaming for help because Mr. Mackey was violently attempting to chew and rip his fingernails off, ripping out his own hair, and spitting, which was confirmed by another inmate. A C.O. responded with two medical assistants, but could not calm Mr. Mackey down or restrain him and in fact lost his radio in the process resulting in the cellmate running to the command center screaming that the C.O. needed help.

“According to the witnesses, seven C.O.s responded and continued to have difficulty restraining Mr. Mackey remarking that it was “unreal the amount of strength [Mackey] seemed to have,” that Mr. Mackey “had incredible strength,” and one had never seen the type of strength that Mr. Mackey had. At no time was Mr. Mackey choked or struck in any way by anyone.

“As the video then shows, the guards are attempting unsuccessfully to restrain Mr. Mackey for their safety, his safety, and the safety of the medical team trying to assist. Eventually, after approximately 20 minutes, the officers are able to restrain Mr. Mackey and he appears to go unresponsive. Medical staff is present and they attempt to resuscitate him. He was successfully resuscitated in the ambulance, but passed away two days later.”

Mackey’s family has stated that they don’t want money, only accountability and reform with better training for prison staff. None of the corrections officers involved in the incident were disciplined, criminally charged, or fired for what family members have called mistreatment and medical negligence.