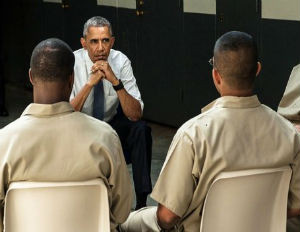 In June of this year, President Obama became the first President to visit a federal prison in the United States. The monumental occasion was captured and shared via VICE special report, “Fixing the System,” on HBO. In this special, cameras look on as President Obama takes an historical tour of Oklahoma’s El Reno Federal Correctional Institution and speaks with inmates about their experiences with the criminal system, and the government’s plans for reform.

Vice Founder and Correspondent Shane Smith accompanies the president and they converse with inmates about what has been done and needs to be done to adequately change the cycling system of imprisonment and provide hope and opportunities for minorities in America.

“There’s an emerging consensus in this country – on both the right and the left – that the way we treat criminal offenders is utterly broken and weakening our society in profound ways,â€ states Smith. “Visiting El Reno with President Obama – the first-ever visit to a federal prison by a sitting president – will give our viewers a firsthand look into how the president is thinking about this problem, from the policy level down to one-on-one conversations with the men and women living this reality … .â€

If you were unable to catch this eye-opening special report, you may catch the full episode of “Fix the Systemâ€ here.

[Watch: Below for a brief trailer of the segment]