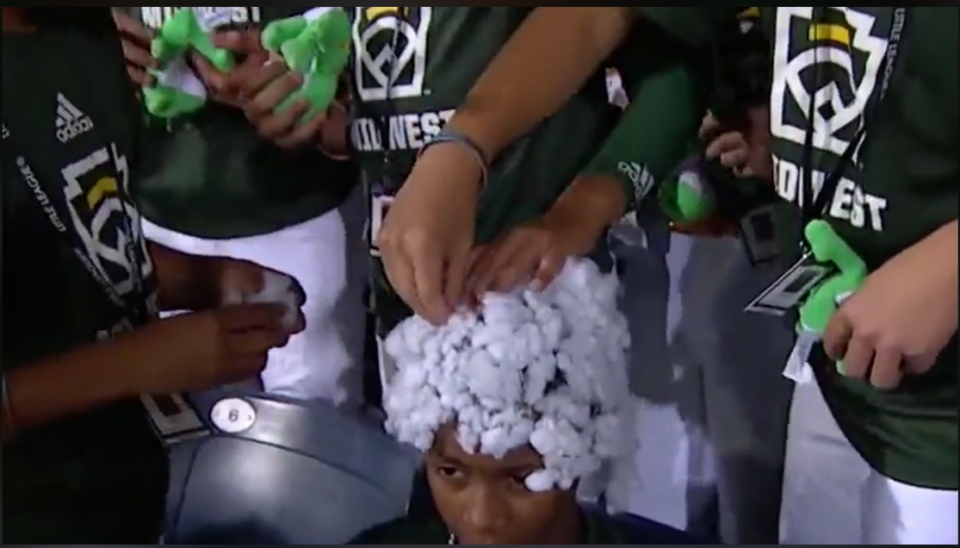 A Black player was allegedly humiliated by his teammates at a Little League World Series game in Pennsylvania on live TV as they casually placed cotton balls on his head during the game.

According to TMZ, several white teenage baseball players who participated in a Little League World Series game this past Sunday gathered around their Black teammate, putting cotton from stuffed toys in his hair as he sat in his seat.

The incident, shown live on ESPN, occurred during the eighth inning of the Red Sox vs. Orioles Little League Classic game in Williamsport. The players were from Davenport, Iowa.

Here’s video from the broadcast: pic.twitter.com/CTUJ2hVg2A

On Monday, a statement from the Little League World Series said after speaking with the Black player’s mother and team coaches, that although the action of the baseball players was “perceived as racially insensitive,” they were assured, “that there was no ill-intent behind the action shown during the broadcast.”

“During the broadcast of the MLB Little League Classic, a Midwest player was shown with filling from a stuffed animal given away at the game on his head. After speaking with the team, as well as reviewing photos, multiple players on the Midwest Region team were taking part in this while enjoying the game. As only one player appeared on the broadcast, Little League International understands that the actions shown could be perceived as racially insensitive. We have spoken with the player’s mother and the coaches, who have assured us that there was no ill-intent behind the action shown during the broadcast.”

Little League’s Official Statement on the broadcast below: https://t.co/ljgDuh2QaL pic.twitter.com/3LlruOuQRD

Most certainly, these kids need a racial sensitivity lesson.