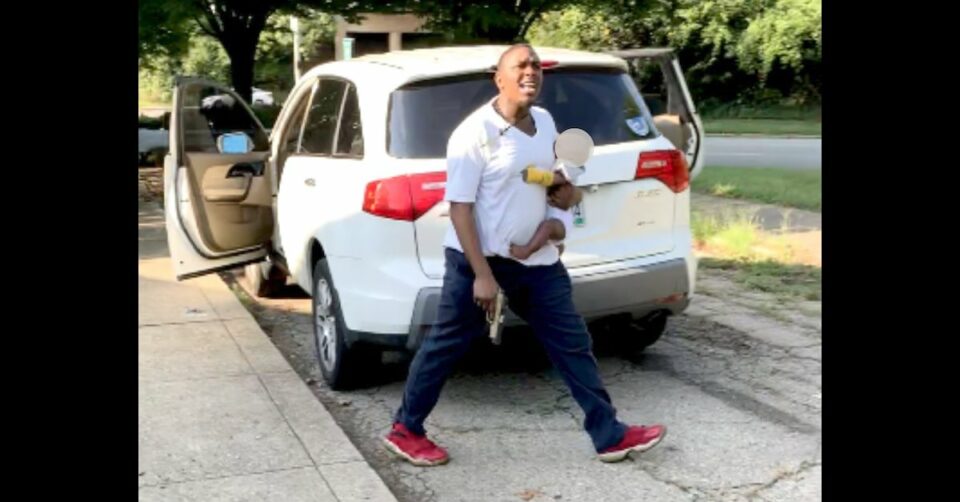 A man was caught on video holding an infant and a handgun as he shot at a woman who had been in a dispute with an acquaintance of his.

According to Law & Crime, a man was seen holding on to a baby in one arm while possessing a weapon in the other one. Police say that 31-year-old Ladon Penn is facing assault, weapons, and child endangerment charges after he pulled a gun in Cincinnati, Ohio, and fired shots at a woman as retribution for a woman who was in a minor car crash.

After a shooting in District One on Wednesday, 31-Ladon Penn was charged with three counts of felonious assault, Child Endangering and Weapons Under Disability. A video recovered from the scene shows Penn firing multiple shots while holding an infant. Details in the post below: pic.twitter.com/Xto20TNrz1

Police officials stated that a 54-year-old woman who said she was allegedly victimized told police officers that “she was in a minor, non-damage car crash” with a second woman.

The second woman allegedly said to the 54-year-old woman, “I’m gonna go get my man, you better go get yours,” and with that statement, both women left the scene. The second woman returned about half an hour later with Penn.

“Penn walked out of his car, walked into a home, and reappeared with a gun,” the police said. “Mr. Penn then start[ed] firing shots at the victim [the 54-year-old woman] and two other women with her. One round ricocheted and grazed the victim.”

Based on court records, Penn has been charged with three counts of aggravated assault in connection with the incident which happened on Sept. 1st.