Viola Davis and Daughter Take a Trip to the Aquarium 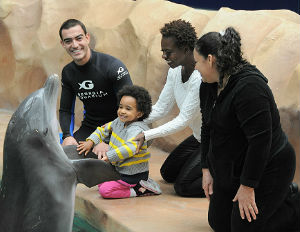 Oscar-nominated actress Viola Davis and her daughter, Genesis, took a day off from Hollywood and visited Atlanta’s Georgia Aquarium. Not everyone gets to get up-close-and-personal with the sea’s happiest creatures, but the mother-daughter team played with one very friendly dolphin–Davis even threw a ball in one’s mouth and he held it there for a picture.

According to BlackCelebKids.com, Viola and her daughter took the afternoon to catch the sea lions and dolphins in “action.â€ But while the California-born actress took a day away from the lights of Tinseltown, she had to get right back to it as she is currently filming the upcoming thriller, Prisoners, alongside Hugh Jackman and Jake Gyllenhaal, which is slated to hit theaters this September.