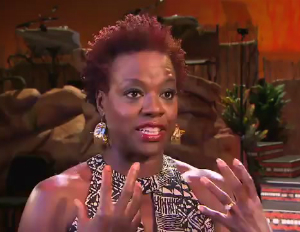 Davis, the celebrity narrator for the June 7th premiere, sparkled in her role in The Lion King: Concert in the Wild, advancing Simba’s story through her narrative and voicing characters from the film. The production weaves scenes from the classic animation with live performances from a chorus of singers and dancers backed by an orchestra.

“I love when you bring all the arts together: the dance, the music, the acting. And I think that that is art at its most potent,â€ Davis says. “I think that’s when it really lives in people and you really can bring a message home in a very powerful way.â€

Davis is becoming a more permanent part of the Disney family this fall, when she’ll star in ABC’s How to Get Away With Murder, a legal thriller from producer Shonda Rhimes. Murder, which will air Thursday nights after Grey’s Anatomy and Scandal, casts Davis as brilliant criminal defense professor Annalise Keating.

Next up for The Lion King: Concert in the Wild on June 14th is veteran actor Avery Brooks, best known for his television roles in Spenser: For Hire and Star Trek: Deep Space Nine. Alfre Woodard, David Alan Grier, Joe Morton, Michael Beach, and Harry Lennix, and other stars will also lend their voices to the production.