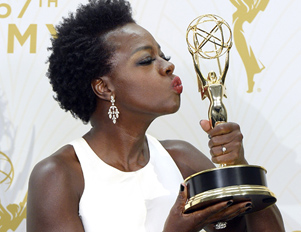 But the award and acceptance speech that made the night a historical one for all, was Viola Davis’ win for Outstanding Lead Actress in a Drama Series; she is the first African American woman to win in that category.

Both she and Taraji P. Henson made history this year as the first two black actresses to be simultaneously nominated for lead actress in a drama series, and after hearing her win, Davis embraced Henson with a warm ‘sister hug’ before taking the stage to give a memorable speech that was just as historic as the award itself.

As the crowd clapped to Davis’ moving words, she continued her speech by thanking key players in Hollywood and her fellow black female actresses for helping women of color get over that line.

“And let me tell you something. The only thing that separates women of color from anyone else is opportunity,” the How to Get Away with Murder star added. “You cannot win an Emmy for roles that are simply not there. So here’s to all the writers, the awesome people…Shonda Rhimes. People who have redefined what it means to be beautiful, to be sexy, to be a leading woman. To be black. And to the Taraji P. Hensons, the Kerry Washingtons, the Halle Berrys, the Nicole Beharis, the Meagan Goods, to Gabrielle Union. Thank you for taking us over that line. Thank you, for the television academy.”

To witness Davis’ shining moment and to hear her speech in full, watch the video below.