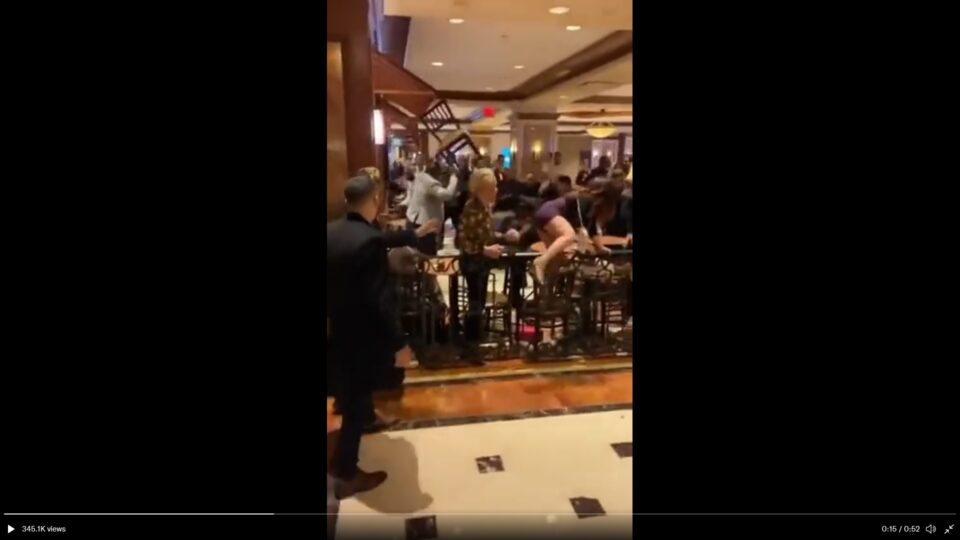 A violent altercation was captured on a mobile phone early last week at a casino in Atlantic City, New Jersey.

According to The Press of Atlantic City, a free-for-all fight occurred at Harrah’s Resort just before 3 a.m. last Tuesday as the violent confrontation was caught on video and posted to social media. A Twitter user with the handle of BeatinTheBookie posted the clip to his account.

Let’s check in on Harrahs Atlantic City (video from a friend)…. pic.twitter.com/Wj3pVyEjVN

Footage of the brawl shows various men in suits pummeling each other, and reportedly, there was no reason given for the incident taking place. One man was seen hitting another with a chair as multiple people were also seen kicking, punching, and jumping on a man as he lay on the ground trying to protect himself. There was only one security guard in uniform seen in the video clip as mayhem ensued.

Local police were summoned to Harrah’s Resort on Tuesday to the skirmish at 2:49 a.m., but they stated that the fight had already ended by the time they got to the casino. According to Lt. Kevin Fair, no one was arrested and charged as none of the combatants wanted to press charges or sign a criminal complaint on Friday.

One person was hurt and taken to AtlantiCare Regional Medical Center with injuries that weren’t life-threatening. It was reported by The New York Post that there was a real estate convention taking place which had hundreds of mortgage lenders and realtors at Harrah’s Resort.

It is unknown if the people involved in the convention were involved in the fight. But someone who witnessed the conflict told The New York Post that the fight broke out after several mortgage firms had several parties across the city earlier in the night.