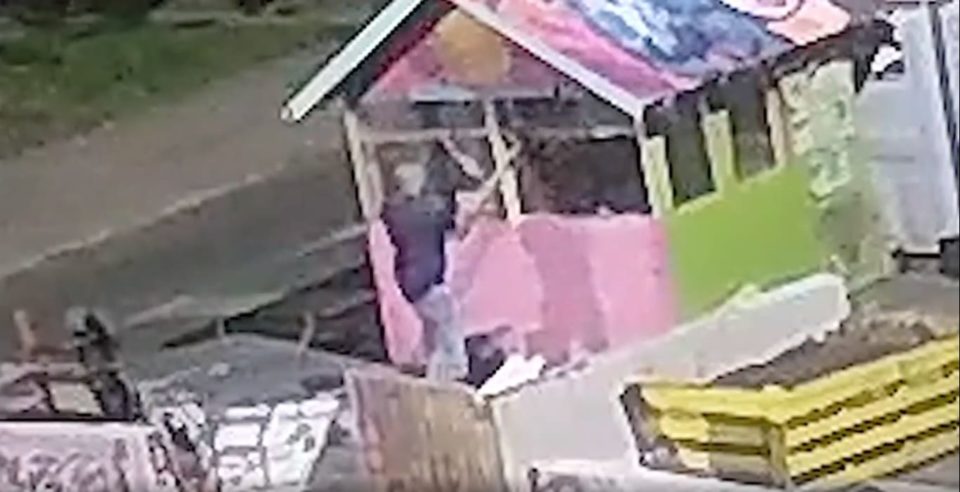 A White man was seen on video destroying a George Floyd Square memorial with an axe in Minneapolis, MN.

On May 16, at around 2 p.m., the man pulled up to the scene. Surveillance footage shows him emerging from a black truck with no mask ripping signs with his bare hands. He then returns to his vehicle to get an axe to chop down the small shrine dedicated to Floyd.

Floyd was a victim of police brutality by former police Derek Chauvin, who on April 20 was convicted of second-degree and third-degree murder plus second-degree manslaughter.

The man committed four-minutes worth of public damage before witnesses yelled at him.

George Floyd Square was rebuilt less than a day, with the organizers on East 38th and Chicago (the organization name as well) saying, “We fine.”

According to The Star Tribune, the George Floyd Global Memorial was “built by members of the community who wanted to preserve the site where my nephew lost his life,” Floyd’s aunt and Minneapolis resident Angela Harrelson said in a statement. “On the anniversary of his death, we will celebrate the impact of his life on our family, friends, the community and our society.”

Harrelson also created a nonprofit called the George Floyd Global Memorial to preserve more than 2,500 artistic tributes by community members at the intersection where Floyd was killed.

The motive behind the axe-wielding White man is unknown. One possible explanation, other than he might be racist, is that the memorial site blocks off the road.

“Everywhere you look, people have created something that reflects the current moment, the actual spot where George was murdered,” read a statement from Minneapolis mural artist Peyton Scott Russell. “There’s flowers with notes and trinkets and things that just reflect people’s offerings. Everyone in Minneapolis processed George Floyd’s death differently.”