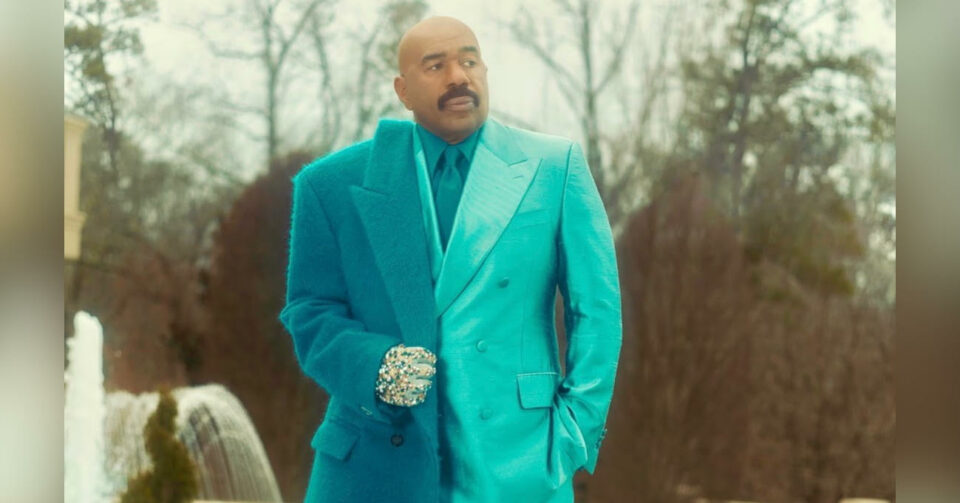 Steve Harvey has made a comeback in the fashion world, from his hallmark suits that his wife Marjorie referred to as “pimp suits” to sporting high fashion looks that had many giving a double-take.

Although the “Steve Harvey suit” was iconic in its own right, the popular TV show host has been serving look after look on his Instagram, having some Twitter users dubbing it “Steve Harvey Fashion Week” as he released fit after fit for his front-row appearances at New York Fashion Week last month.

But who’s to credit for this transformation? It certainly doesn’t hurt to have a fashion designer as a wife.

In a recent cover with Paper Magazine, where Harvey paid homage to the late fashion trailblazer André Leon Talley, he shares that his wife, Marjorie Harvey, was the one responsible for revamping his look.

“She got me out of the big suits to begin with,” he recalls. “She just came home one day and said, ‘I’m tired of being married to a pimp.’ And I said, ‘What the f— do you mean?’ And she said, ‘The big suits and all of that.’ I’m sitting up here thinking, ‘Hold on, you ain’t say nothing when you married me, I had on them big suits.’ She said, ‘Yeah I married you, but I was going to change you,’” he laughs.

Ditching the oversized shoulder on the suit jacket and wide pant leg, personal stylist Elly Karamoh was summoned for his expertise, stunning the internet as he now showed up dripped in designer, bold colors, and sleek lines, as previously reported.

Calling himself “the flyest 64-year-old on the planet” in an interview with Yahoo! last year, Harvey undoubtedly lives up to his “self-imposed” title, and the internet agrees.

However, the legendary comic we grew up watching still bleeds through the designer in the form of daring colors.

“‘Range, Mr. Harvey, range,’” the comedian brings to mind Karamoh reminding him. “‘You don’t get stuck on this look right here. We have to show range.’”