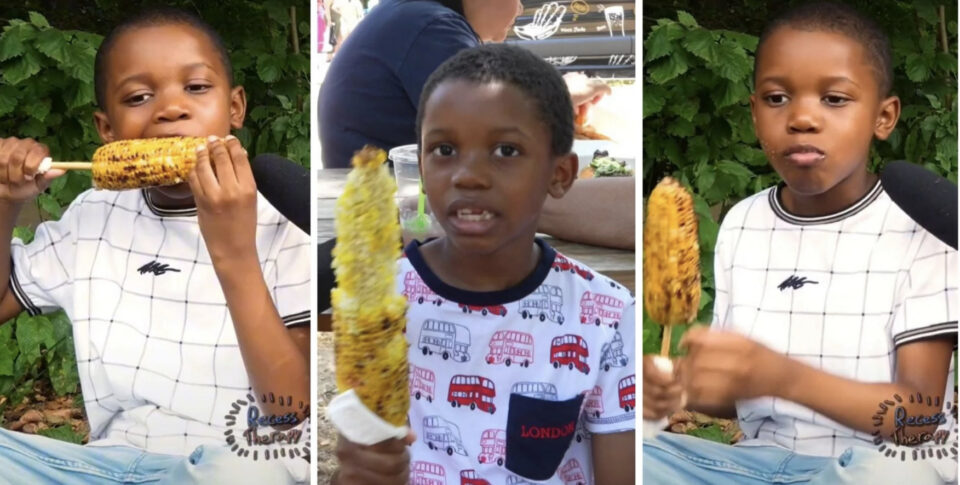 Dubbed the “corn kid,” Tariq is the internet sensation who went viral for his enthusiastic interview that has since been turned into a catchy song with people dancing to it on repeat.

May corn always be in season for Tariq so he can collect his coin and continue embracing his love for the yellow vegetable.

Now the little boy and his family are keeping up the momentum by capitalizing on his success.

In an interview, comedian and actor Julian Shapiro-Barnum of Recess Therapy introduced Tariq to its audience of over 2 million followers on Instagram.

“Ever since I was told that corn was real, it tasted good,” Tariq explains while holding an ear of grilled corn on a stick, adding, “but when I tried it with butter, everything changed!”

In the clip, Tariq takes bites of the corn he loves so much. “Look at this thing!” he says. “I can’t imagine a more beautiful thing!”

The video was posted on Aug. 4 and has now garnered over 1.7 million views with positively overflowing comments. Some users note how innocently and adorably he says corn and the joy he brings to people’s timelines.

“Is this kid getting any concrete support for the joy he’s providing everyone in these dark times? Would 100 percent donate to a college fund so he can save his $$$ for 🌽”, one user wrote.

“The way this kid says corn is my favorite thing on the internet today,” another chimed in.

A second interview was posted last week of the infamous corn advocate back at it again to talk about corn, grease, butter, and more. The reunion between Tariq and the host has even inspired a dance that could easily pair with “It’s Corn, “the official song launched by Recess Therapy immortalizing the first interview.

Users are championing for the kiddo to make his bag, which he’s doing. Tariq is on Cameo!

The video-sharing website lets people pay their favorite celebrities and influencers for personalized videos. In his own right, Tariq has already customized over 20 videos ranging anywhere between $150 and $500, and his glowing five-star reviews are multiplying, Entrepreneur reported.

Over the weekend, Tariq captured the hearts of Nebraska Cornhuskers’ fans with a Cameo video he personalized for the team.

“I want to speak on behalf of Tariq and say that he is just having so much fun with all of this!, Shapiro-Barnum commented on the song announcement post.” He’s genuinely over the moon that so many people have been sharing in the love of his absolute fav thing (corn)! So thank you for showing him that the internet CAN be a positive and loving place💕🌽”