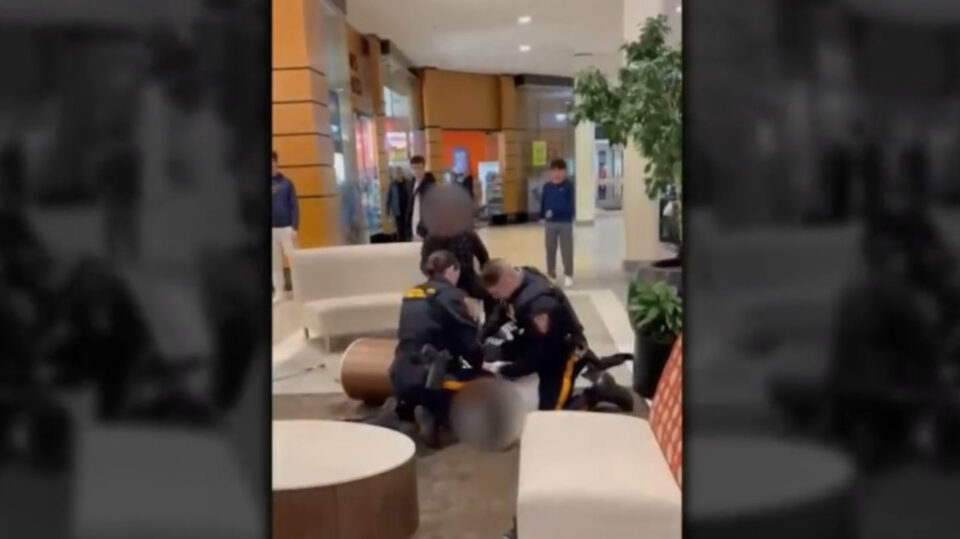 A video has gone viral after a Black teen involved in a fight with a white-looking teen at an NJ mall is seen being tackled to the ground by police officers.

The teen, who is Latino but was labeled and appears to look white, is handled with kid gloves and told to sit on a sofa as the cops jump on the Black teen, kneel on his back, and arrest him as the white teen sits by and watches.

According to WPIX, a video showing preferential treatment toward the white-looking teenager after he engaged in fisticuffs with the Black teenager has caused controversy.

The video shows the two teenagers fighting and two white police officers immediately breaking up the fight,  throwing the Black teen on the ground and handcuffing him. Meanwhile, a white female officer is seen “directing” the white-looking teen to take a seat, uncuffed and left alone, while the Black teenager is down on the ground with the added pressure of the white female officer placing her knee on his neck as he lays on the floor.

The incident occurred at the Bridgewater Commons Mall in Bridgewater Township, New Jersey.

In the video, a witness can be heard saying, “It’s cause he’s Black. Racially motivated.”

The Latino teen spoke to WPIX about the incident. He stated that it was unfair for the police officers to attack the Black teen and not place him in handcuffs since both of them were fighting.

“I knew it was wrong, and I knew there was gonna be problems when they did that,” the 15-year-old teen named Joey, who was involved in the fight, said. “They didn’t go for me.”

He also stated he didn’t understand why he wasn’t placed in handcuffs, although he offered to be.

“I didn’t understand why,” the teen said. “I even offered to get handcuffed as well.”

“The Township Administration is aware of a video circulating on social media involving some young people and officers of the Bridgewater Police Department.
“The rules governing the use of force by police officers in New Jersey are codified by the Office of the Attorney General. In order to absolutely ensure that these policies and regulations were upheld in this instance, Chief Payne has requested that the Somerset County Prosecutor’s Office conduct an independent review of the incident, with the unqualified support of the BPD.”
“It is not appropriate for me or any other Township official to comment any further on the details of this incident while an investigation is ongoing, except to say that I am completely confident that the Prosecutor’s review will be impartial, objective, and thorough.”