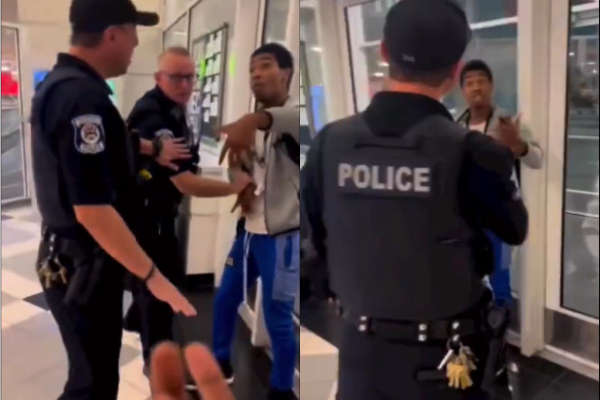 A video showing a Black college student being accosted by police officers on his school’s campus is upsetting many on social media who believe the young male was racially profiled.

Oakland University in Rochester, Michigan, is under fire after a video posted by Be Black With No Chaser showed a confrontation between a Black student and two police officers who accused the student of showing a fake ID.

“Imagine being racially profiled on campus of your school for 3 days in a row,” C.J. Lawrence wrote in the tweet.

“That’s what happened to This young brother at Oakland University (Detroit/Auburn hills) after being accosted by the police & being forced to show his ID only to then be accused of it being a Fake ID.”

Imagine being racially profiled on campus of your school for 3 days in a row. That’s what happened to This young brother at Oakland University (Detroit/Auburn hills) after being accosted by the police & being forced to show his ID only to then be accused of it being a Fake ID. pic.twitter.com/Z7ifnnprmA

The video shows one officer grabbing the Black student’s hands as the student remains adamant that he did nothing wrong. The young man recording the incident can be heard challenging the officers and asking why they’re going after the Black student.

“Why are you grabbing him? Let him go,” the witness repeatedly asks while the officer is seen grabbing the Black student on camera.

The officer grabbing the student then claims the Black male has been “hitting” him in the arm “the entire time.”

“You’ve been grabbing him,” the witness says. “You gonna let him go?”

The student continues pleading his case while the officer maintains his grip.

“He’s grabbing me putting his hands on me!” The student exclaims, adding, “I ain’t do nothing to him!”

Eventually, officers allowed the student to go into his backpack and retrieve his identification. Once he does, he questions the officers’ initial claims of him carrying a fake ID.

“Tell me if this is fake or not,” the student says. But, the officer insists on seeing another ID.

“That’s his only ID,” the witness recording the incident says.

“Open up your wallet, let me see all of them,” the officer demands.

The student pulls out a series of cards and throws them on the ground. Ultimately, the student walked away from the officers without facing charges or detainment.

The student threatened to sue the school for what his friend said was a case of racial profiling. Many on social media expressed their displeasure with the footage.

“I get nervous to even watch these bc I don’t want it to end with the cop pulling a gun,” one person said.

“They need to be FIRED asap,” added someone else.

Oakland University has yet to respond to the now-viral incident.