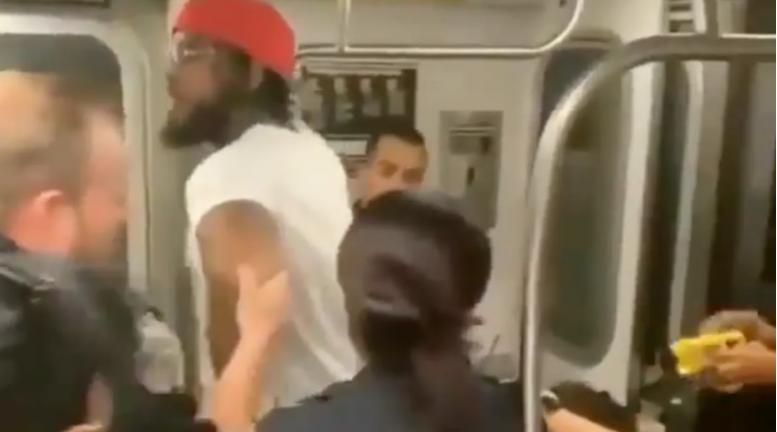 The NYPD is facing criticism after a now-viral video shows a group of officers work to bring down a Black man they accused of helping someone else skip out on paying the subway fare.

On Wednesday, NYPD released body camera footage of the July 6 arrest of 29-year-old David Crowell, after a clip showing more than a half dozen officers surrounding the suspect and tasing him went viral on social media, NY Post reports.

“A short video has been circulating that describes an arrest that occurred on July 6 inside the 116 St. subway station,” the NYPD said in a July 14 tweet. @NYPD28Pct officers stopped an individual who opened an exit gate for an acquaintance to enter the subway, evading the fare.”

“Body-worn camera footage shows the man cursing at officers, refusing to exit the train, & threatening them,” the NYPD added. “With additional officers on scene, the man continued to resist arrest, prompting the use of a taser. He was subsequently taken into custody.”

Body-worn camera footage shows the man cursing at officers, refusing to exit the train, & threatening them. With additional officers on scene, the man continued to resist arrest, prompting the use of a taser. He was subsequently taken into custody. (2/2) @NYPDTransit @NYCTSubway pic.twitter.com/etjeTp9kKY

On Thursday, NYC Mayor Bill de Blasio said the situation needed to be “looked at carefully,” and acknowledged that “we did not end up with a de-escalated situation.”

Crowell was on the train when he was heard telling officers on the platform multiple times, “I paid,” the footage shows.

A gang of @NYPDnews officers swarmed onto a train, jumped on and tased a young Black Man. They accused him of fare evasion and many witnesses on the train, tried to explain to the cops that he did pay his fare. pic.twitter.com/2DPXwPFwVR

But then Crowell was heard shouting profanities at the cops including “f—k the police,” while lifting up his shirt to apparently reveal an anti-cop tattoo, NBC News reports. At one point, Crowell even threatens the officers.

“You bust that s—t, I’m going to run you. I promise you,” the suspect said.

de Blasio says Crowell acted aggressively, but officers could have done a better job at deescalating the encounter.

The man that Crowell let into the station for free eventually did pay his fare after being confronted by officers, police said. However, the department declined to release the name of the officer who was seen using his stun gun against Crowell.