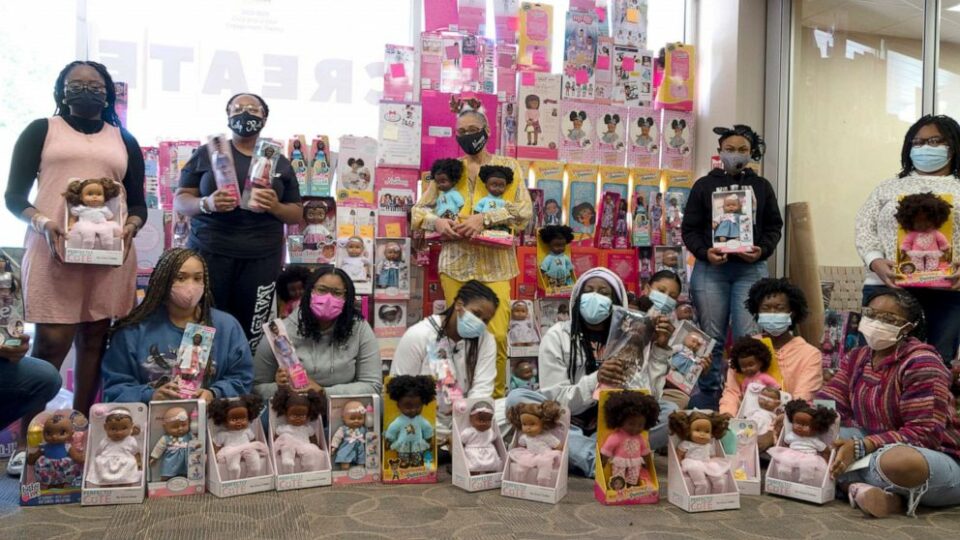 As reported by Good Morning America, the Annual Black Baby Doll Drive was organized by a group of students at Mary Baldwin University, a private university in Staunton, Virginia. This yearly tradition has successfully been carried out for the past 25 years. Each year, the students, primarily freshmen and who all live on campus in the Ida B. Wells Living Learning Community, collect dolls from professors and staff on campus and the community.

“I hope that the girls who we are giving these baby dolls to will take away that their power is limitless,” said Caitlyn Russell, 19, a freshman at Mary Baldwin University. “I want them to be able to see that they have the power to do whatever they want.”

Rev. Andrea Cornett-Scott, the university’s chief diversity officer, oversees the drive in the local community. With her leadership and the generosity of the college students, the goal and purpose of the drive is to help young girls see themselves reflected in the baby dolls, and as a result, acknowledge just how beautiful and powerful they truly are.

“We know that there is a clear tie between the achievement gap and self-esteem, especially for Black girls,” said Cornett-Scott. “And oftentimes, African American girls have problems with self-image because they don’t see a lot of images of themselves in the media, and often they struggle with whether or not they’re beautiful.”

“We wanted to make sure we had a program that spoke to their outward and inner beauty, so we decided to do the doll project so they could see themselves in the dolls that they play with,” she added.

As the drive approaches each year, the students learn about what’s known as “the doll tests,” a series of experiments designed and conducted by psychologists Kenneth and Mamie Clark in the 1940s to test children’s racial perceptions and study the psychological effects of segregation on African American children.

The Supreme Court cited the results of the studies in its decision of the 1954 case Brown v. Board of Education, which led to the desegregation of schools in the United States.

For Cornett-Scott, utilizing the “doll tests” ultimately demonstrates to the students that the importance of the Black baby dolls transcends beyond them as just toys. Representation is what matters.

Teaira Jordan, a 20-year-old sophomore, shared that she found her self-esteem by participating in the doll drive.

She went on, “When I was a kid, my Black baby doll had white features. So to see that there are Black women going the extra mile and making dolls who have bigger noses and bigger lips and rounder faces, it just is inspiring, and I wish I had that growing up.”