Virginia Has High Turnout in the Rain 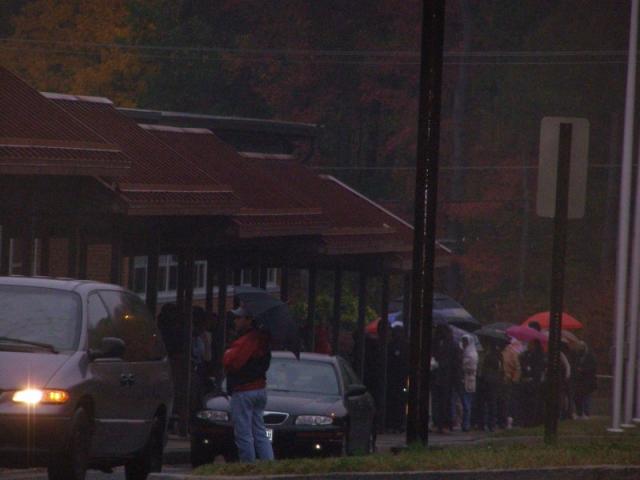 RICHMOND, Virginia — At 5:35 A.M. about 200 people were already in line at my polling place at Laburnum Elementary School in Henrico County, just outside the Richmond, Virginia, city limits.Â

Most seemed to be over age 50, and many held umbrellas in the darkness and drizzling rain. Â The voters here at Precinct 211 were roughly 98% African American and talking quietly about how the line was beginning to stretch around the block as we waited for the polls to open. Â Police arrived at 5:55 A.M. to warn voters queued up along the unpaved shoulder of the road to be cautious of oncoming traffic. Â By 6:00 A.M. when the voting started, approximately 350 people were in line. Â The crowd moved in good order and talked a little louder in friendly conversation with strangers. Â

There were no obvious problems or disputes at the tables where voter registration cards and photo IDs were compared with the computer printout of eligible voters. Â The five touch-screen voting machines all worked properly. I finished voting by 7:00 A.M.

The Richmond Times-Dispatch newspaper, however, reports that at another Henrico precinct that had a similarly large turnout, most computerized voting machines were not working at the beginning of the day. That got fixed in 45 minutes. Â Paper ballots were being used at some other Henrico precincts. Â Throughout the Richmond metro area in Central Virginia, voter turnout before 6:00 A.M. was reported as heavy.

Lynchburg, a smaller, less ethnically diverse city west of Richmond, had a light rain and heavier than usual turnout. Â

The Lynchburg News Advance reports that by 9:00 AM several hundred persons had voted at each of various locations.

Rain was falling in the conservative western part of the Old Dominion, and The Roanoke Times reports long lines in some polling places, but short lines in others. Â The region’s early-bird voters seem to have arrived as polls opened, not an hour before like in Richmond.

It was raining in Virginia’s diverse Tidewater region, butÂ The Newport News Daily Press reports that almost 1,000 people were lined up at one of Hampton’s busiest precincts as polls opened. Â Long umbrella-carrying voter lines encircled other Hampton locations in the first hour of voting.

In northern Virginia, the weather was overcast and cool, not rainy. The Potomac News and the Manassas Journal Messenger reports a crowd of 350 at 6:00 A.M. waiting for polls to open in Dale City, along with lots of illegally parked cars.